Describes the wildest part of the Adirondacks 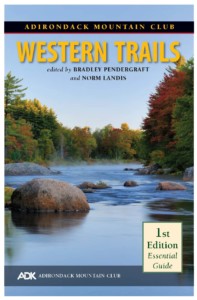 Lake George, N.Y.—ADK has released Adirondack Mountain Club Western Trails, marking the completion of its reconfigured Forest Preserve Series of Adirondack and Catskill guides. Western Trails describes hiking opportunities defined by the Adirondack Park boundary to the north, west, and south and by the villages of Paul Smiths, Tupper Lake, and Long Lake to the east—arguably some of the wildest lands in the eastern United States.

The region includes rivers, flatlands, and mountains as well as a wealth of ponds and lakes. Seven Wilderness Areas, thirteen Wild Forest Areas, the extensive St. Regis Canoe Area, one Primitive Area, and two state forests fall within this guide’s purview, as does the relatively new Cranberry Lake 50, a network of trails linked to form a 50-mile hiker’s challenge.

In developing Trails Illustrated maps to the Adirondack and Catskill Parks with National Geographic, ADK also began the work of reconfiguring its Forest Preserve Series of guidebooks. The goal, now met, was to coordinate the maps and guides, reduce the overall number of guides, and provide comprehensive map coverage for both parks that corresponded to ADK’s already thorough series. Although the boundaries have changed, the editors of Western Trails contend that the area covered in this book comprises the wildest part of the Adirondacks.

Western Trails is edited by Norm Landis and Bradly Pendergraft. Landis, a state-licensed outdoor guide also certified in wild lands search and rescue, served as editor of ADK’s former West-Central Region guide and is semi-retired as a writer and editor at the Daily Sentinel of Rome, New York. Pendergraft’s experience as a geologist, environmental consultant, and educator informed his exploration of what he calls the “civilized wilderness” of the Adirondacks: “Even in the heart of Five Ponds Wilderness one is never that far from civilization.

[A hiker] can find great areas of virgin forest, yet hike on old railroad grades or logging roads…come around the bend on a trail and find abandoned logging equipment or the remains of a logging camp.”

Pendergraft started his career as a geologist in Alaska, including a year living north of the Arctic Circle, before moving to Parishville, New York, where he farmed, built a consulting firm, and later taught Geology for many years.

ADK, founded in 1922, is a 30,000-member nonprofit organization dedicated to protecting the New York State Forest Preserve and other parks, wild lands, and waters through conservation and advocacy, environmental education, and responsible recreation. ADK publishes twenty titles, including outdoor recreation guides and maps and armchair traveler books, and conducts extensive trails, education, conservation, and natural history programs. Profits from the sale of ADK publications help underwrite the cost of these programs.