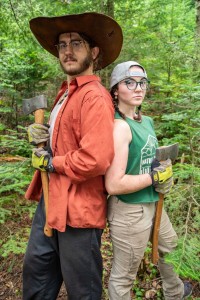 Over 300 volunteers have participated in an ADK supervised volunteer trail project. Forty-one students volunteered in one of the many week long teen trail projects. Thanks to the chapters, for sponsoring a student. All of the volunteer projects have been well attended leading to a great start to the trail building season. Along with the training sessions mentioned below in the Professional Trails Program section, both volunteer leaders participated in a two day Leave No Trace trainer course.

This season, two trail steward workshops were held for aspiring ADK trail stewards. All of the workshops were led by Andrew Hamlin, ADK’s Trails Coordinator. The trail steward workshop is intended to give trail maintainers an understanding of basic trail maintenance concepts and standards such as how to properly clean out a drainage structure. This training is necessary to become an official trail steward under ADK’s volunteer stewardship agreement with the Department of Environmental Conservation (DEC).  Upon completion of the workshop participants are supplied with a copy of ADK’s Basic Trail Maintenance Manual. On June 16, the first workshop was held on the trail to Mt. Arab which is positioned just west of Tupper Lake. On October 6, the second one-day workshop took place in Blue Mountain. Nine volunteers on Mt. Arab, and three volunteers on Blue Mountain learned the principles of cleaning drainage, blow-down removal, side-cutting, and trail marking.

The Adopt a Lean-to and Trail Steward program have been a part of ADK’s volunteer program for just over 30 years.  The Trail Steward program is managed by Herb Coles.  The Adopt a Lean-to program, by Hilary Moynihan.   Both Hilary and Herb have been working tirelessly to maintain both programs, and we are deeply appreciative of their efforts.  Both volunteer programs have 216 volunteers currently participating to perform basic maintenance on trails and lean-to’s in the Adirondack Forest Preserve.  In total, 131 Lean-to’s were maintained, and cleaned.  Thirty-one miles of trail were sidecut, 1069 pieces of blown down trees were removed from the corridor, and 461 drainages were cleaned.  Approximately 7149 volunteer hours were spent completing that work.  In addition to the hard work, our volunteers provide critical information to New York State Land Managers.  If there is significant damage that was sustained to their trail section, they can report that information directly to the DEC. The DEC can then direct resources to fix the issue as needed. With over 2000 miles of trails in the Adirondacks, having these extra eyes, are critically important in rehabilitating damaged trails in a timely manner.  If you would like to participate in either program you can get information on our website.

ADK celebrated National Trails Day on June 2 in the Town of Old Forge. Trail projects focused on side cutting trails that were in need of serious love. Nine volunteer trail projects took place in a variety of wild forests and wilderness areas surrounding the Old Forge area. Free camping was available to all trail volunteers at DEC’s Nicks Lake State Campground. Dinner was prepared and provided by the Pickle Boat Grill; a local restaurant in Old Forge. The band Partridge in the Pines performed into the evening, and the beer was provided by the Lake George Beer Hub.

Eleven ADK trail volunteers returned to Johns Brook Lodge (JBL) to complete patrols (drainage cleaning, side cutting, and blown down tree removal) of some nearby trails. One large crew focused their attention on the Hopkins Trail, where there was a substantial amount of blown down trees. The other major renovation was improving the new bridge spanning across Johns Brook.  A crew added extra bracing, an additional row of decking, and stained the bridge.

Two five-day long front country trail projects were supervised by ADK Volunteer Crew Leaders at the end of June. For the sixth time, the Great Camp Sagamore hosted the ADK volunteer trails program. Staying at a restored cabin with meals provided, five volunteers worked on the surrounding trails. A half mile of trail was installed that connected the Beaver Flow Trail to Sagamore Rd.

During the second week a volunteer crew of nine constructed a 27 foot long span bridge over the outlet of Clear Pond. In addition the crew also installed an 8 foot long bog bridge to make access to the span bridge easier.  Elk Lake Lodge located in the town of North Hudson. Volunteers ate all of their meals and stayed at the Elk Lake Lodge during the trail project. Many of the volunteers returned for another season to participate in this unique trail project.

Geared specifically for people between 14-17 years of age, five, five-day long back country trail projects took place in 2018. The first project was located on Poke-O-Moonshine in the Taylor Pond Wild Forest. Six volunteers reestablished twenty earthen waterbars. On top of all that hard work the crew also managed to re-vegetate 180 square feet of impacted soils.

The second week had the crew working in the Hoffman Notch Wilderness. Seven volunteers installed approximately .5 miles of new trail to the top of Jones Hill.

Crews hardened a section of trail in the Pharaoh Lake Wilderness during the third week. In total, five participants installed a 60 square foot rock turnpike.

During the fourth week the crew traveled south of Indian Lake into the West Canada Lakes Wilderness Area. A crew of eight worked on the Northville-Placid Trail near Spruce Lake. One, 12 foot long native log foot bridges was built to replace an older bridge that were not useable anymore. In addition the crew patrolled 2 miles of the trail, removing several pieces of blown down trees.  The crews returned for to Hurricane Mountain to continue the construction of a rock retaining wall and rock staircase for the fifth and final week. 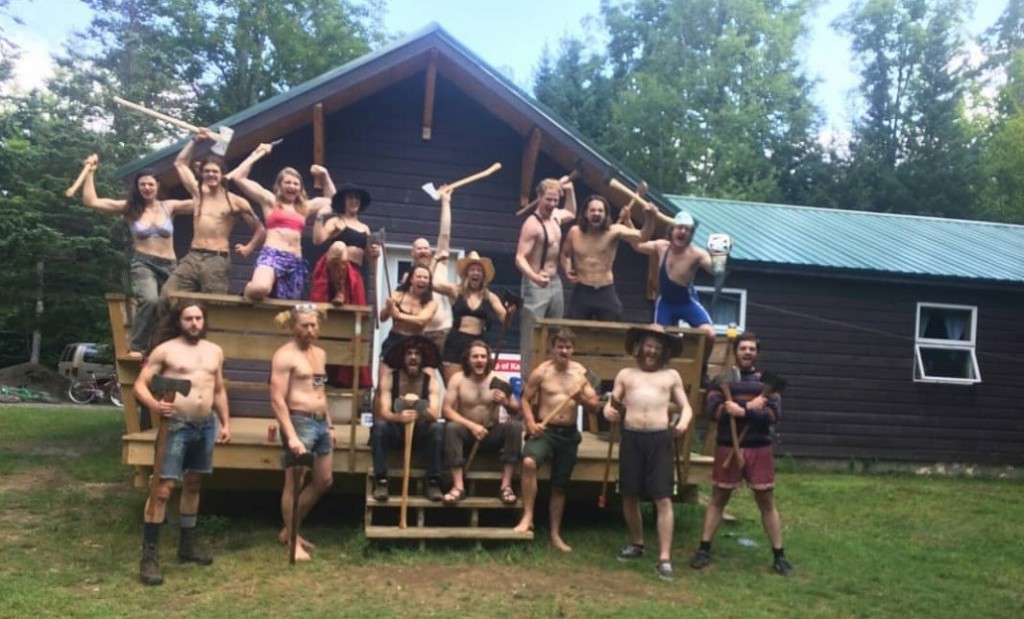 The Professional Trail Crew’s season began with a week of skills training. Andrew and Liza, the Supervised Volunteer Trails Program crew leaders, trained with the Professional Crew. The first day was spent at Heart Lake where the basics were covered such as tool & equipment safety, proper tool use (rock bar, axe, etc.), and how to set up a high line system. The entire crew then worked along Mt. Jo on Adirondack Mountain Club property. A number of different kinds of structures were built including 46 feet of bog bridging, 40 feet of stepping stones, and 8 rock steps.

After skills training, the entire Professional Crew, including the volunteer leaders, participated in a two day wilderness first aid course that was run by Wilderness Medical Associates. To finish up training, the entire crew embarked on two days of patrols on trails in the High Peaks Region. The crew patrolled over 46 miles of trail and removed 74 pieces of blown down trees. Training and patrols

On the Woodland Valley trail, the Professional Crew spent a week repairing an existing rock staircase.  This repair work will 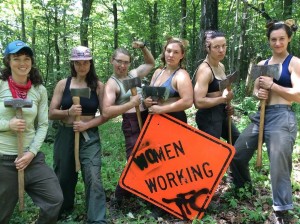 ensure that the structure will continue to protect the trail from erosive forces.  One week was spent on the Willow trail.  Work consisted of creating a .5 miles of new trail.  A week of patrols were completed in the southern Catskills, where 90 pieces of blown down trees were cleared from the trail corridor.

For ten weeks the professional trail crew worked in the Mianus River Gorge. They installed a half mile of new trail in this private forest preserve.  The proposed route for the trail had a minimal out slope of thirty degrees.  It was incredibly difficult to navigate this stretch of terrain before the trail was installed.  Given the nature of the steep out slope, a rock retaining wall was built on the down slope of the trail, and then a crushed stone pad was placed behind the rock wall to level out the trail surface. In total over 500 rocks were placed along the trail.  The trail is now accessible to the public.

After six weeks, an ADK Professional Crew completed a new route to the summit of Poke-O-Moonshine.  This project was multifaceted and included technical rock work where stones needed to be pinned directly onto bedrock. The new trail is an incredible improvement from the original trail which suffered enormous erosion issues.  So much so that some sections of trail had widened over 200 feet wide as hikers scrambled up the steep grade.  This project was funded by the Friends of Poke-o-Moonshine. 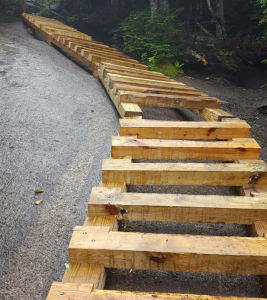 The Hoffman Notch Wilderness has a new trail up to the top of Jones Hill.  The Professional Crew spent two weeks installing this 3 mile trail.  The North Country National Scenic Trail, and the DEC also spent several hours clearing the trail corridor in preparation for the crew.  The focus was on digging into the soil to create a benched trail through the steeper pitches.

The Professional crew spent four weeks near the summit of Big Slide Mountain.  One hundred and one feet of dilapidated ladders were replaced by the crew with dimensional lumber.  This project was graciously funded by the Adirondack Forty-Sixers.

The big news this summer was the work that was completed on Mt. Van Hoevenberg.  A staggering seventeen weeks were spent installing a brand new trail to the summit of Mt. Van Hoevenberg.  This was a very intensive project as over 960 stones were placed along the edge of the trail corridor. Then stone was crushed by hand and laid in the trail.  On top of that crushed stone, mineral soil was placed.  The idea was that this type of trail design will last significantly longer than a traditional design.

In the Beaver River Trail Complex an ADK Professional Crew worked for one week cutting out the existing corridor, and installing approximately .5 miles of new trail.  The Crew also spent a week on the Lost Pond Trail near Wanakena.  Work consisted of installing a short reroute, and installing several hundred feet of dry tread.