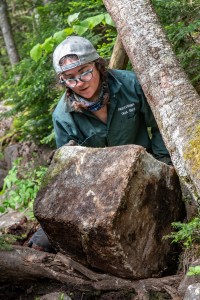 or most of June, ADK’s (Adirondack Mountain Club’s) professional trail crew—often referred to as the “pro crew”—has been working on the one mile stretch of trail bordering Avalanche Lake in the Eastern High Peaks Wilderness. Avalanche Lake, a popular destination due to its dramatic rock formations and views of Mt. Colden, is also a common thoroughfare for hikers looking to overnight at Lake Colden, or visit Mt. Colden and the MacIntyre Range. The trail that takes hikers around the lake and on to these backcountry locations is known for being a rough, rocky, and muddy experience. As such, the pro crew has focused their efforts on revamping that stretch so that it can better handle the volume of hikers traveling through each summer. Some of the trail projects that they have been working on include:

Turnpikes: a common feature in chronically wet sections of trail, turnpikes are raised trail beds that feature a rock border containing a layer of crushed rock capped with mineral soil. These features encourage drainage off the tread itself and provide a more durable surface for hikers to travel on. Focusing on the southern section of the trail that follows the Hitch-Up Matildas, the pro crew has been constructing a series of turnpikes in order to raise the trail above the edge of the lake, which is sometimes less than a foot from the path. 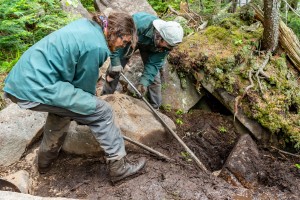 Retaining Walls: Being that the Avalanche Lake trail winds through a very narrow section of flat land between the lake and neighboring Avalanche Mountain, it is constantly at risk of eroding into the lake. As such, the pro crew put efforts into reinforcing the edge of the trail using rock retaining walls, which should help prevent the trail from washing away.

The pro crew’s work in Avalanche Pass this year is funded by a grant from the Adirondack 46ers. This is part of a three-year commitment from the organization to support ADK’s stewardship efforts in the High Peaks region. Following this project and the ongoing trail work at Poke-O-Moonshine in the Northeast Adirondacks, the pro crew will be moving on to major projects on two High Peaks: Haystack and Skylight.

Interested in supporting ADK’s professional trail crew and the trails they maintain? You can do so by donating here. 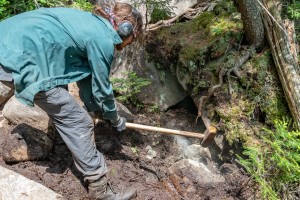 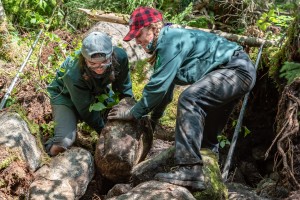