ADK’s (Adirondack Mountain Club’s) professional trail crew (pro crew) always works at a high level, but this month they took their efforts to new heights by tackling projects on two of New York’s tallest summits: Haystack and Skylight. With the goal of delineating the trail above treeline to help protect the sensitive alpine environments found on both mountains, the trail crew spent two weeks building cairns and dismantling the infamous Skylight rock pile. 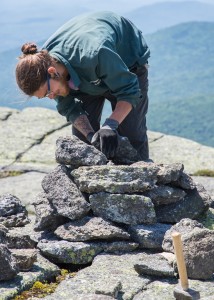 This work was funded by a grant from The Waterman Fund, an organization devoted to alpine stewardship and education. Founded in memory of well-known writer and alpine steward, Guy Waterman, The Waterman Fund follows in his footsteps by supporting stewardship efforts throughout the Northeast. Their backing was critical to the planning and execution of these two projects.

The two week stint started with trail work on Haystack, the third-tallest peak in New York State. Working closely with summit stewards, the pro crew worked to construct 21 cairns along the south-facing trail. Cairns are a critical fixture for trails above treeline; they help delineate the trail, especially in inclement weather and low visibility conditions. By guiding hikers along a defined path, they also minimize the chance that alpine vegetation will get trampled.

The project not only involved the process of building the cairns themselves, but also the harvesting and transportation of suitable rocks to build them. Alpine trail work is different from work below treeline, as special considerations need to be made in order to prevent accidental damage to alpine vegetation or disruption of the thin soil layers found there. This represented an excellent opportunity for the pro crew to develop new skills and to work side-by-side with the Summit Stewardship Program.

On Mt. Skylight, the trail crew spent a week dismantling a man-made rock pile on the summit. A product of Adirondack lore, the Skylight rock pile has increased dramatically in size over the last decade to the point that it is damaging fragile alpine vegetation. The legend goes that, if you don’t carry a rock to the summit of Skylight and leave it there, bad weather will come on your descent. This is not only false, but also puts alpine vegetation and the general wildness of Skylight at risk. When summit stewards began dismantling the pile in 2018, it was nearly 3 feet tall at its highest point, and had a width of approximately 20 feet. 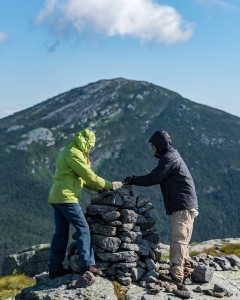 Crew members used rocks from the pile to reconstruct cairns on the summit and to pack in sections of trail above treeline. At this point, the summit is nearly free of the rock pile (see the before and after pictures below), but it will only stay that way if the tradition of carrying rocks to the top ends. So, if you visit Skylight, please do not pack a rock up to the summit. Leave the summit as you found it so others can enjoy its wide alpine meadows and great views of neighboring high peaks.

If you wish to support ADK’s professional trail crew and their efforts to build sustainable trail networks throughout New York State, you can do so here. 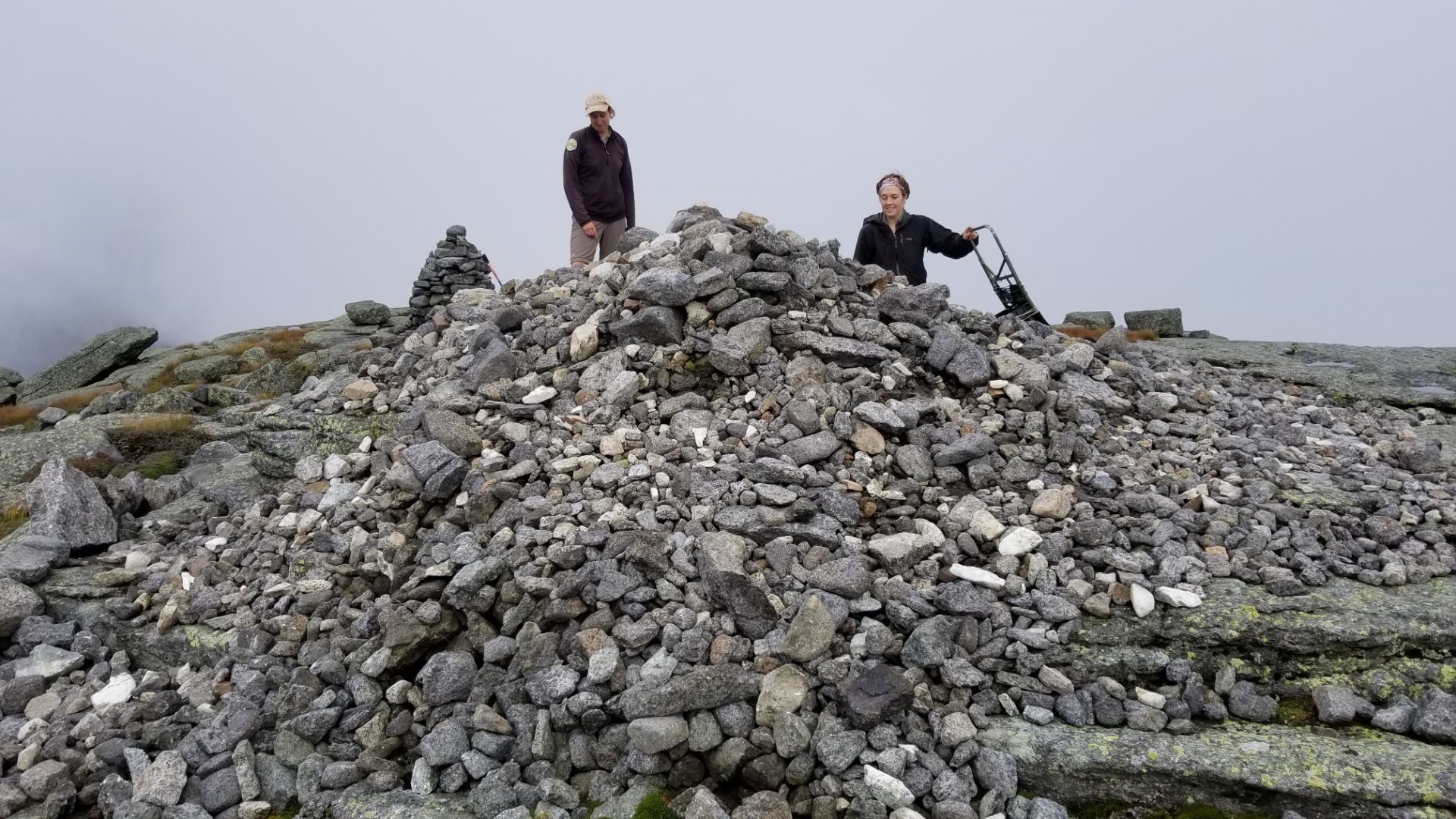 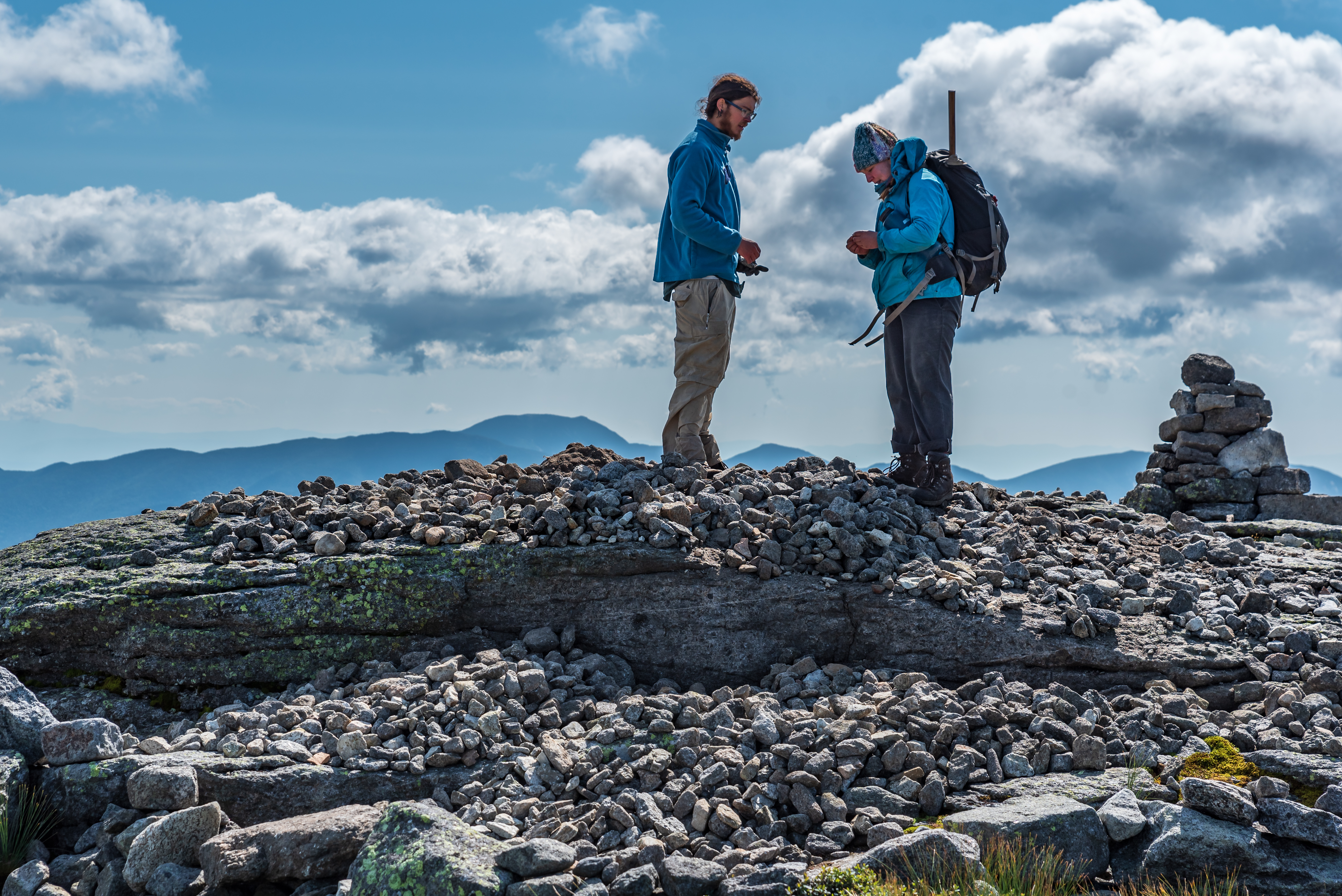 Ben Brosseau is ADK's Director of Communications. Born in the Adirondack Park, he spent much of his youth moving around the country from New York to Washington to Iowa, and then back to upstate New York to start working for ADK in 2018. He is a graduate of Grinnell College, where he received a bachelor's in English with honors. When not working, Ben can often be found hiking on the trail, working on photography, or drinking a nice cup of coffee.