“Mayfly Maggie” and “Tamarack Tom” left the Adirondacks for the first time in the 2020–2021 school year. They traveled south to Brooklyn, east to Long Island, and west to the Rochester, New York, area in order to visit kids who usually come to them. They dressed for the weather and introduced hundreds of fourth graders to the beauty of the wilderness.

OK, not exactly. Yes, their ideas and likenesses and enthusiasm ventured out of the park, but they didn’t. Not for real. They went—you guessed it—virtually.

As folks all over the world adapted to the new virtual way of doing things, ADK has pivoted to online programming, too. With Newell’s college training as a filmmaker, she and Manitta turned their extensive knowledge into a series of funny, lively videos featuring their educator personae of Mayfly Maggie and Tamarack Tom, to take kids on adventures through the wilderness, right from the comfort of the youngsters’ own homes or classrooms. 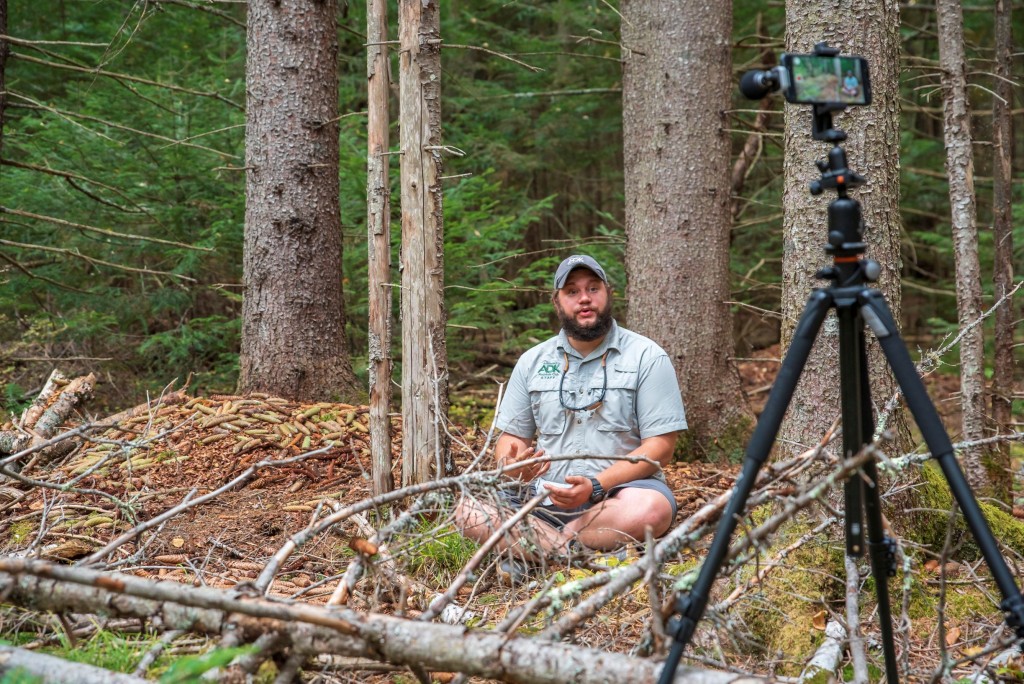 ADK’s skills workshops also went online this year. Courses such as map and compass skills and winter preparedness, among others, followed an online interactive format. ADK also continues to post free videos to YouTube for anyone to see any time.

This shift to digital delivery has allowed ADK to continue to offer an extensive roster of educational programming, despite the pandemic. And in an interesting twist, it has expanded ADK’s outreach, says Director of Education Seth Jones. “It has allowed us to reach more people where they are and improve accessibility for many who can’t necessarily travel to the Adirondacks, even in good times,” Jones explains.

Nothing beats the real thing, of course, so in 2020–2021 ADK still offered in-person winter outings for adults, limiting the size of the groups to meet COVID protocols. But being able to teach the core material to explorers downstate, or in Massachusetts and even as far away as Chicago, has allowed ADK to get important lessons out to a wider audience. As Jones wrote in these pages last summer, the pandemic has simply pushed the education team to move forward with a goal that actually predates COVID: to expand virtual programming.

In a typical in-person year, some four hundred students in thirteen schools that are within an hour-and-a-half drive visit Mayfly Maggie and Tamarack Tom at ADK’s education center on Heart Lake. For many fourth graders who participate in the Haberl “Three Seasons at Heart Lake” program, the trip up Mt. Jo is the first hike they have ever been on. 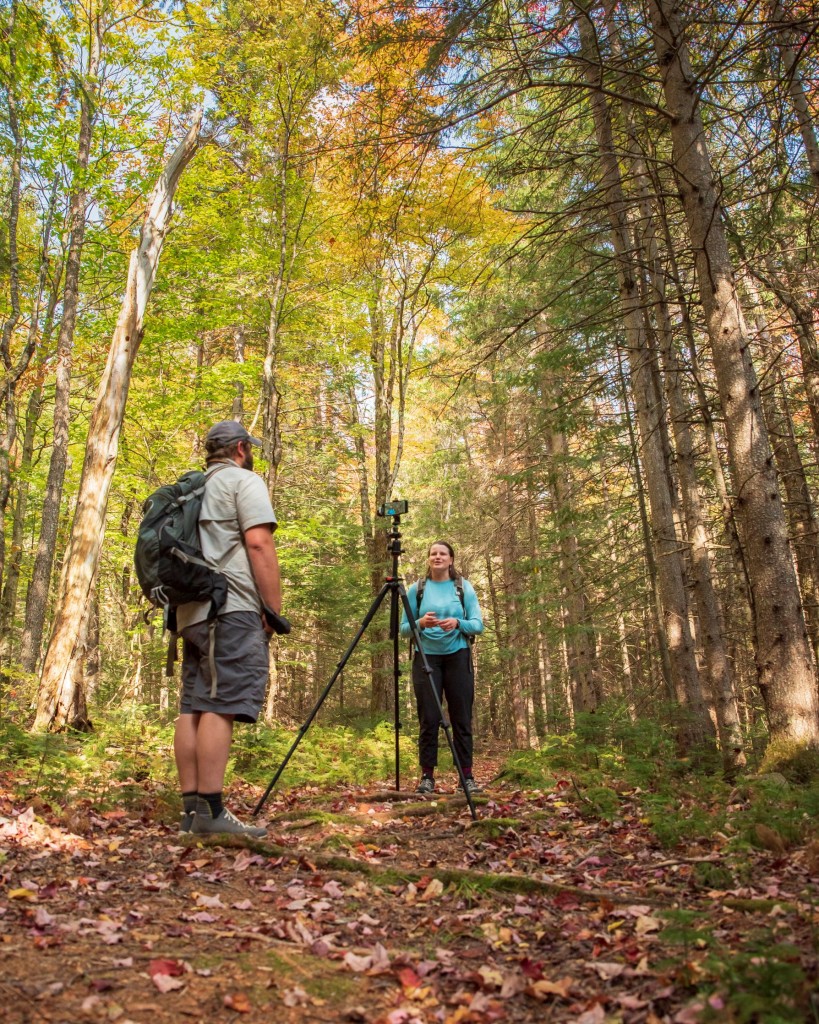 When they realized they would not be having kids on-site this year, the education team got busy. Newell, ADK’s outreach coordinator, and Manitta, the interpretive manager, converted the program into a series of videos that they shared with classroom teachers and home-school groups. Re-tooled as “Bringing Heart Lake to Your Backyard,” the program has reached more than five hundred kids from across New York State and even as far away as the Philadelphia suburbs.

“This is over one hundred kids we wouldn’t have typically worked with,” says Manitta. “We continue to grow and to reach more students, which is something to celebrate.”

In each video, Newell and Manitta address the topics they usually cover during the Three Seasons at Heart Lake program. They discuss how to dress for winter fun, introduce and reinforce the seven principles of Leave No Trace, explain the difference between hibernators and winter sleepers, point out wildflowers, and talk about how animals adapt to their environments as the seasons change. But it’s not straight lecture. You’ll see Mayfly Maggie trying to paddle a canoe on a frozen lake, and Tamarack Tom rolling into a sleeping bag and out again to snack on a granola bar, to demonstrate the “winter sleeper” habits of a black bear. To give the feeling of hiking Mt. Jo, Newell and Manitta filmed themselves on the route with no kids along, complete with chuckles as they scrambled up the rocks, and pointed out fascinating natural features and critters along the way.

“They are hilarious,” says Saranac Lake teacher Diana LeBlanc. “These videos are so well done. Maggie and Tom could have their own TV show and it would be a hit.”

The filming continued all winter; even as one video was presented to classes, another was being shot. As of this writing in early March, the two producers were already thinking spring, starting by situating Heart Lake on a map of New York State. Other spring topics include mapmaking and mapping naturalist observations; Leave No Trace, especially Principle Two, Choose the Right Path, to encourage students to walk through the mud while hiking (Newell anticipates some silly shots playing in mud puddles); new spring growth, about wildflowers; and vernal pools, about seasonal puddles that are crucial habitat where amphibians lay their eggs.

“First and foremost, Maggie, Tom, and the ADK team are teaching our students how to be safe in the backcountry,” says LeBlanc. “For some of our students, this program is an introduction to wilderness exploration. For others, it is an extension of what they already know. All of our students are gaining a greater love of the outdoors, a sense of the need to protect our wild areas, and the desire to explore.”

Newell, who graduated from Connecticut College in 2019 with a double major in film and environmental science, was perfectly positioned to lead the project. Each film took about a week to produce, shoot, and edit, with Manitta and Newell making a plan and selecting the activities to accompany each lesson. Newell then developed the plan into an outline of a script, and what each shot would cover. They didn’t actually memorize their lines, because they already have lessons they’ve honed from sharing these topics with students in person over the years.

After the initial filming together, Newell shot extra takes and clips to add to the main film, then edited and assembled the finished product. All of their shooting was done on location, often with the beauty of ADK’s Heart Lake property as their backdrop. They also filmed on other local trails when that was convenient.

“We typically do multiple takes—you never know what will go wrong in the background that you don’t notice,” Newell says. “We have many funny bloopers, some of which we left in.”

Their passion for the subject and for sharing their knowledge with young people pours out of the screen. “I’m doing exactly what I’ve wanted to do since I was twelve years old,” says Manitta, a 2014 graduate of Paul Smith’s College, who describes himself as someone who “strives to be more old-fashioned” and typically avoids screen time.

If adaptation is the key to survival, all indications are that online programming is here to stay: ADK educators and leadership have embraced this new way of meeting adventurers of all ages. COVID is sending people outdoors in droves. And even though ADK instructors might not be able to teach what they love in-person right on the trail, they continue to share their knowledge and best practices in any way they can.