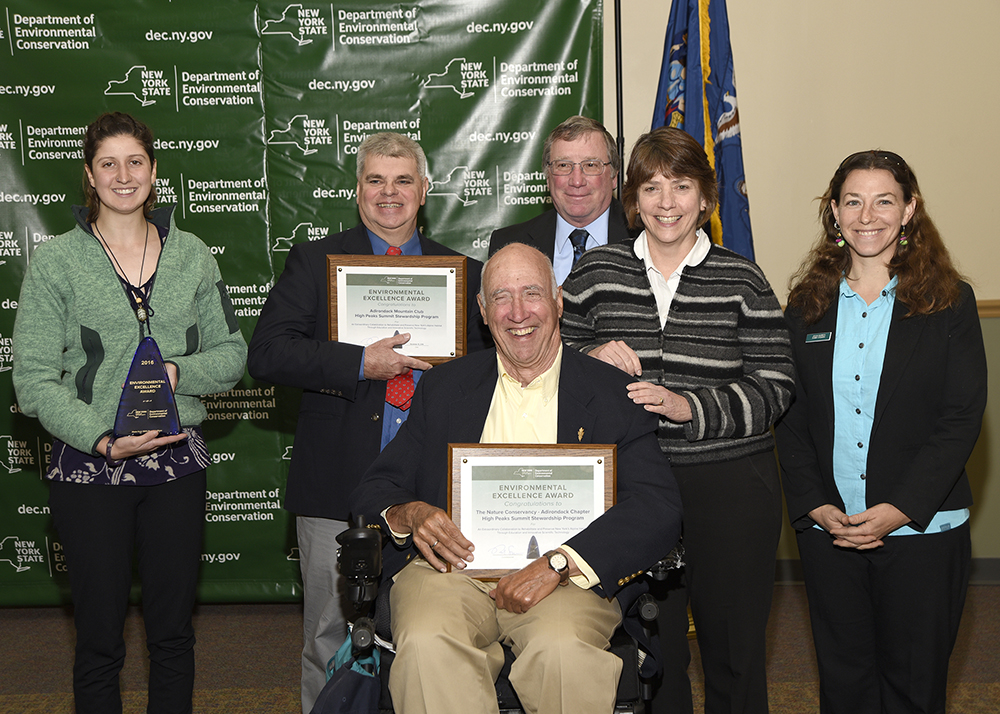 LAKE GEORGE, N.Y. – The Adirondack Mountain Club (ADK) and the Adirondack Chapter of The Nature Conservancy are pleased to announce that the Adirondack High Peaks Summit Stewardship Program was awarded the coveted New York State Environmental Excellence Award at a ceremony on November 15 at Union College. The annual award is given by the state’s Department of Environmental Conservation in recognition of outstanding, innovative and sustainable projects or programs and unique partnerships that are contributing to a healthier environment and economy and serving as models of excellence. According to the DEC, award winners are an elite group of committed organizations leading by example as serving as models of excellence within their industry and community.

The High Peaks Summit Stewardship Program is a partnership of the Adirondack Mountain Club, the NYS Department of Environmental Conservation and the Adirondack Chapter of The Nature Conservancy to protect rare and fragile alpine plants on top of New York’s highest peaks. Since its founding in 1990, the program has connected with nearly 450,000 hikers, raising awareness about alpine habitat and the importance of stewardship.

The program was selected for this honor due to the strength of the collaborative effort that sustains it and the strength of the scientific evidence showing the efficacy of its work. Repeated photopoints studies conducted throughout the program’s 27 years show that vegetation atop the summits is recovering and there is a statistically significant difference in recovery between peaks that have a Summit Steward and those that do not. Photos taken from the same locations years apart show more vegetation and fewer bare rocks. The improvements are more dramatic on those peaks served by Summit Stewards. In addition, the award recognizes that the program serves as a model for others in the state and across the country.

“The Adirondack Mountain Club is honored to receive the much-coveted NY State Environmental Excellence award on behalf of the High Peaks Summit Stewardship Program. Receipt of this award validates the work of this collaborative partnership to protect the state’s rare and precious alpine vegetation and helps reach new audiences as we fight to prevent these plants from becoming extinct in New York State and in some cases, across the entire globe,” said Neil F. Woodworth, Executive Director of ADK.

“The Nature Conservancy is proud to join with our partners to accept the NY Environmental Excellence Award for the High Peaks Summit Stewardship Program. Thanks to this collaborative program, we are witnessing recovery where there was once decline and we are demonstrating how vital education and science are to environmental stewardship. This work is giving the Adirondack alpine a real chance at long-term resilience,” said Tim Barnett, Nature Conservancy Vice President and former executive director of its Adirondack Chapter.

“The Nature Conservancy is a global conservation organization dedicated to conserving the lands and waters on which all life depends. Guided by science, we create innovative, on-the-ground solutions to our world’s toughest challenges so that nature and people can thrive together. To learn more about our work in the Adirondacks, visit www.nature.org/adirondacks or follow @AdirondackTNC on Twitter.