Home/Discover/News/Skylight Does Not Want Your Rocks

Skylight Does Not Want Your Rocks

Mount Skylight, the fourth highest peak in the Adirondacks, is known for the gigantic pile of rocks sitting at the summit. According to an old legend, carrying a rock up the mountain will keep it from raining on you while on the summit. Hence the tradition that has pursued for years; every hiker leaves a rock at the top.

The phenomenon on Skylight, however, should not be mistaken for the “Carry-a-Rock” program, an initiative started by the Adirondack High Peaks Summit Stewardship Program in 1999. The idea is to help Summit Stewards bring rocks to certain summits for trail work that protects the rare alpine vegetation. Trail crews use the rock to build scree walls, construct cairns, and pack loose soil, all of which encourage hikers to stay off the delicate vegetation and travel on durable rock surfaces. Currently, the rocks are meant to be carried from the trailhead at the Adirondak Loj to the summits of Marcy, Algonquin, Wright, and Colden, but not Skylight. 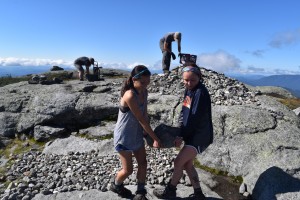 In fact, rocks are the last thing Skylight needs. Summit Stewards have made great efforts to utilize the overwhelming heap at the top, but unfortunately there are only so many cairns to be built, scree walls to be laid, and loose patches of soil to be filled in. This season, stewards carried down or spread out 80 crates of rock from the pile, each weighing around 75 pounds. That is equivalent to 6,000 pounds, or three tons, and there is still plenty of rock up there. It’s safe to say that the rocks have become much more of a nuisance than a help.

Beyond the futility of the rocks, they are also damaging alpine vegetation. The larger the mound gets, the more trampling and erosion the vegetation undergoes, especially when rocks fall and land on the fragile plants. In fact, the heap has grown so large that it has obstructed the trail; now hikers are veering off of the durable rock and stepping on plants to avoid stumbling on the rock pile.

It has also become popular among hikers to construct their own “rock stacks” out of this infinite accumulation. Whether it is intended for fun or to guide others, most of these stacks are quite precarious. Official cairns are approved by the land manager and constructed by Summit Stewards to mark the trail above tree line, and are designed to withstand hurricane-strength winds. Rock stacks built by hikers may be misguiding and unstable, posing dangers for both alpine plants and humans.

Although an individual rock may seem small and insignificant, the accumulation of them leaves a significant footprint on the mountain. For the sake of allowing all species to flourish, plant and human alike, this trend on Skylight must end. In fact, I hear there’s an old legend that if you carry a rock up Skylight, you will find rocks in your shoes as you hike down the trail!

Sadye is a sophomore at Hamilton College participating in an off-campus semester in the Adirondacks. She is interning with both ADK Mountain Club and Keene Central School, and enjoys hiking and creating music in her free time.

Ben Brosseau is ADK's Director of Communications. Born in the Adirondack Park, he spent much of his youth moving around the country from New York to Washington to Iowa, and then back to upstate New York to start working for ADK in 2018. He is a graduate of Grinnell College, where he received a bachelor's in English with honors. When not working, Ben can often be found hiking on the trail, working on photography, or drinking a nice cup of coffee.