This summer, just two weeks after arriving at ADK (Adirondack Mountain Club) as a summer naturalist intern, four coworkers and I set out to catch one of New York’s rarest plants in bloom: alpine azalea. Found only on a single remote summit in the High Peaks Wilderness, alpine azalea is best defined by its tiny, pink, cupped flowers that appear for less than one month a year. To reach it, we found ourselves looking at a nearly 20 mile round-trip hike from the Loj; a daunting prospect to us. But we were nearing the end of alpine azalea’s short blooming period and, as naturalists, we just had to see it before it was too late. It turned out to be one of the best adventures of my life so far. 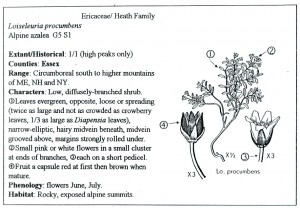 The hike itself was beautiful, but the real moment came 10 miles in after we broke tree line. Our eyes immediately began scanning the exposed, rocky peak for clumps of alpine azalea. As we walked closer to the summit we found plenty of diapensia—an alpine beauty in its own right—but the miniscule flower that called us to the summit appeared to be playing hard-to-get. We were beginning to worry that we had missed the bloom until we finally spotted it hiding in the shade of some nearby diapensia by the trail. Elated, we all snapped pictures using fingers and Fruit Loops for size comparisons. With our “natural” curiosity satiated, we moved on to the summit where we marveled at the view that accompanied that incredible alpine flower. On the way down, we found several more patches of alpine azalea to gawk at before heading back into the trees. Now that we knew what to look for, it was much easier to pick it out. Traveling a long way to such a remote peak to see a flower smaller than a Fruit Loop was a truly humbling experience, and one I won’t soon forget.

Heading back to the Loj, we pondered how specialized alpine azalea is to its environment. Growing on a single summit in New York, it is clearly limited in where it can live, yet it can withstand some of the worst weather North America has to offer. From hurricane force winds and constant sub-zero temperatures in the winter to diverse, rapidly changing weather patterns throughout the summer, this dwarf shrub that barely measures over a few inches is a true story of survival. Yet, at the same time, being stepped on can prove fatal to this alpine beauty. It represents a fragile balance, one that we hope to help preserve.

This thought, and the trip as a whole, provided a lot of inspiration for a very important alpine exhibit in this year’s Nature Museum at the Adirondak Loj and Heart Lake Program Center. On your travels in the High Peaks, join us naturalists and the summit stewards in protecting alpine vegetation by taking a pledge to stay off the alpine veg!

Want to help protect the rare alpine species found in the Adirondacks? You can support the Summit Stewardship Program here. 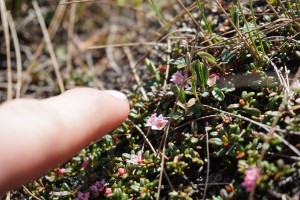 Zach is a sophomore at St. Lawrence University and is currently studying for a bachelor’s degree in Environmental Studies with a minor in Outdoor Studies. As a resident of the High Peaks region of the Adirondack Park, he joined ADK as a naturalist intern to help educate visitors and learn more about the place he calls home.