How to Protect Your Backcountry Food—and You!

My last gear review in Adirondac looked at freeze-dried food alternatives. Many of you let me know reading the article made you hungry! Guess who else likes the food you carry into the backcountry? Bears, pine martens, raccoons, and mice are all happy for the unintentional food delivery service you provide. It’s also a good time to review food protection in the Adirondacks as state requirements for both zones and time periods for use of bear canisters are changing (more on that in a future Adirondac).

Why are bear canisters needed? Once bears become habituated to humans and learn that we can be an easy source of food, they can become nuisances, repeatedly returning for free meals. Requirements in the Adirondacks are strict, and rightfully so, as the number of people in the backcountry combined with large bear populations historically led to years of unfortunate bear-human encounters, mostly due to poor food protection. 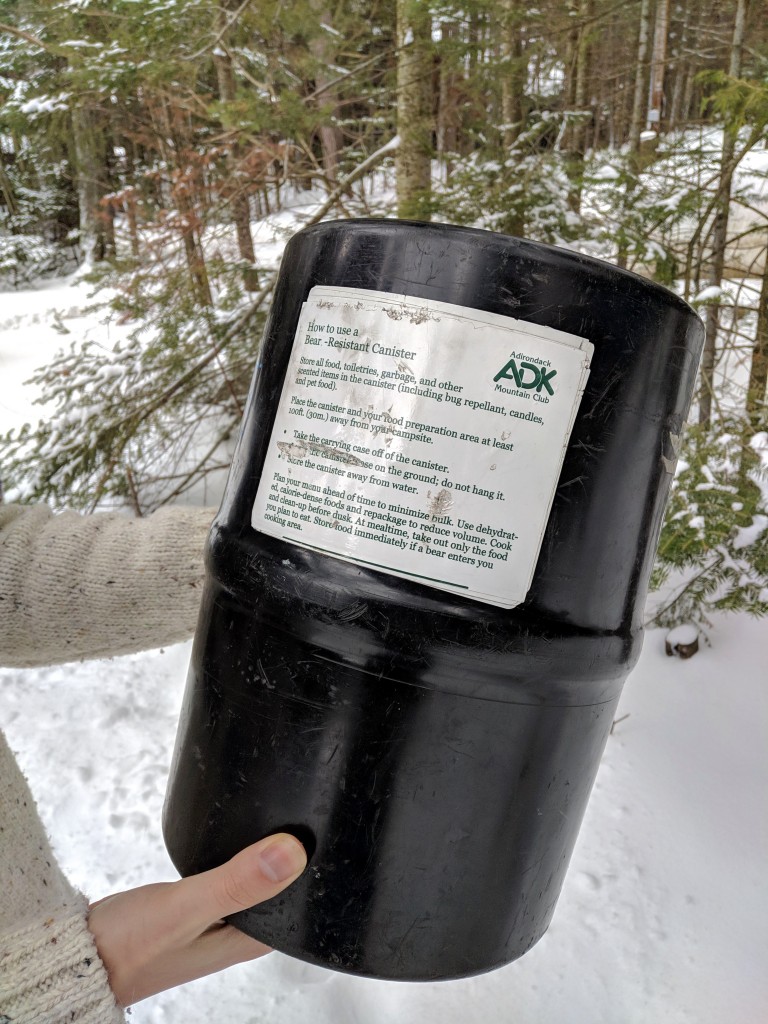 What bear canisters work well? The standard canister is the Garcia Bear-Resistant Container (pictured right). It is a sturdy 10-liter (614 cubic inch) container weighing two pounds, two ounces (weights henceforth designated, for example, 2.2). The lid is secured by three latches that are easy to open and includes a small push button to help pop the lid.

The canister I favor is the Bare Boxer, a much smaller container (4.5 liters or 275 cubic inches, weighing 1.10). A highlight is its cartoons and humorous instructions (make sure a bear isn’t watching you from behind a tree as you open the canister with your car keys; they learn easily and might grab those keys!). These canisters run around $60 to $75. An obvious drawback is their weight. Enter a new contender: Bearikade by Wild Ideas. It’s a lightweight carbon fiber cylinder designed to hold much more food while weighing the same as or less than the other models. An added bonus is no rim or sloping sides to complicate packing. Models range from the Scout (1.12 for 500 cubic inches) to the Expedition (2.4 for 900 cubic inches). This is the high-end entry, with prices ranging from $255 to $349.

Why would you spend money on a bear canister anyway, aside from the fact that overnight stays in the High Peaks require it? If you’ve ever had a bear encounter, you know the canister is worth the weight in your pack (and maybe worth the money). It may even save you the time of hanging a bear bag elsewhere in the backcountry. You do have to change how you pack and what foods you bring. Some people need more space and may not easily make the transition. Indeed, the only canister for rent at the ADK High Peaks Information Center is the higher-volume Garcia model. Campers are unlikely to have packed food that will fit well in less space. The smallest canister holds over nineteen cups—that’s eighteen couscous meals and coffee for six days!

It’s up to you to creatively depart from this bare minimum standard of cuisine. Some campers have tried to evade the regulations by carrying a canister for most, but not all, of their food. An assistant ranger tells the story of a group who, believing that canned food would be safe from bears, lined cans between sleeping bags in their lean-to. Imagine waking up to a new guest happily tearing into your canned goods! After running away for the rest of the night, the campers returned to find a bloody mess as the bear’s mouth was cut by sharp metal edges. We really don’t understand how remarkably strong these animals are. Another camper thought it a good idea to confront a bear at his lean-to. Hitting a bear over the head with a shovel just makes a bear angry! After being chased away, the camper returned to find all his gear finely shredded by a vengeful bruin. Worse, by not properly storing your food, you risk putting others in harm’s way of a bear now unafraid of humans.

Even outside bear season, food needs to be protected. Ursack is a soft bear-resistant high-performance fabric bag option, approved in most backcountry settings (except for the High Peaks Wilderness). Less than eight ounces with ten-liter capacity makes it a great option. And why do you need food protection in cold weather? Mice, squirrels, and, in the High Peaks, pine martens take up residence around campsites in winter. This suggests a reminder for all seasons: Store your canister away from your quarters, and upside down. They are not waterproof—rain, snow melt, and urine will enter an upright container. Urine? Pine martens are known to mark your canister after being frustrated. So there!

Tom Hart is a member of ADK’s Albany Chapter. A retired teacher, he lives in Lake Placid.