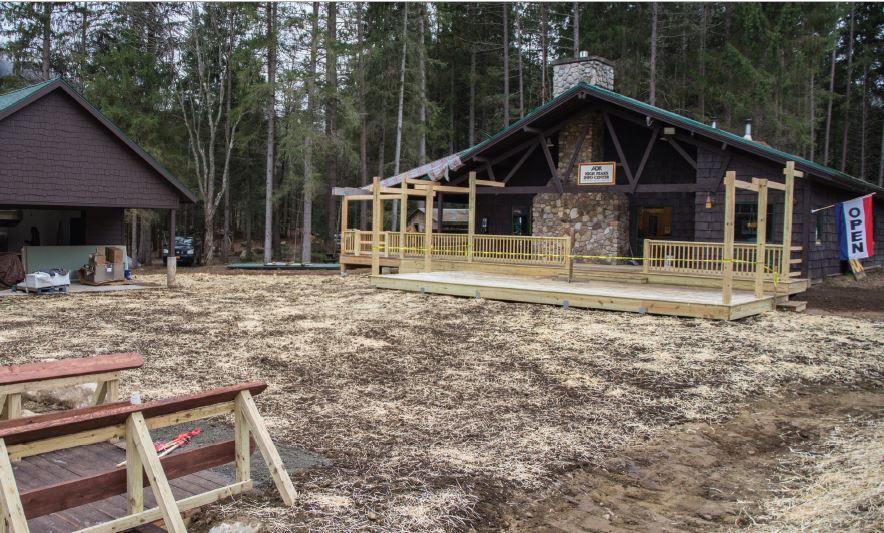 Over the past two years, ADK has invested over 1 million in capital improvements at its Heart Lake Program Center to better serve the public and its members. These improvements would not have been possible without numerous generous donations, grants from New York State and the Cloudsplitter Foundation, and the thousands of hours that ADK volunteers dedicated toward construction. Thank you!

ADK appreciates everyone’s patience while the improvements were taking place. They include:

The woodshed is full, the shutters are installed and the gutters stores and as such Johns Brook Lodge (JBL) is rigged for winter operations. This fall the intrepid crew of volunteers worked all day Friday and Saturday through every type of inclement weather imaginable moving 80-100 tons of rocks from around the property to fill the bridge abutments and finish the bridge. I dare say each rock was moved at least 3 times before coming to rest in the abutment as most of the rocks were harvested from around the lodge itself, rolled down a hill, picked up again, moved to the bridge, and then picked up a third time to make it into the abutment. In the process we wore out and broke 2 wheelbarrows. It also goes without saying that the collection of rocks we have amassed around the lodge from digging footings, grey water systems and other holes has been depleted. In addition to the rock work, the bridge approaches were finished, the treadways and steps were turn piked and other punch list items that had not been finished by prior crews were taken care of.

The second major project of work weekend was wiring the propane generator into the solar system. This was accomplished Friday afternoon and the generator was run for 4 hours and 8 hour Saturday to completely charge the storage batteries for the solar system. The upside of the new solar system is that it has a built in automatic battery charger that will charge the batteries whenever we run the generator. This will be our long term backup power source for when the Solar panels are not generating enough power to charge the batteries. Work is also ongoing to revisit the current design and resolve the problems experienced with the solar system over the system and have a remediation plan for this coming spring.