The Lost Pond Nature Trail: From Dream to Reality

Transcribed from his ribbon cutting ceremony speech on May 31st, 2019 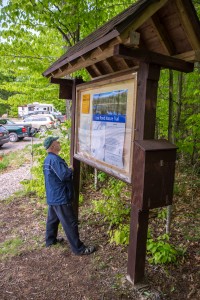 The trail is 2 miles long, including a 0.9 mile loop around the pond. It is marked with custom-made, white, plastic markers, designed and paid for by the FPP. The markers feature the silhouette of a great blue heron, painted by Laurie Lattof. Most of the trail sits on land now owned by Molpus Woodlands, a timber investment management organization. The trail is accessible to the public in perpetuity according to the conditions of a conservation easement purchased by the State of NY about 2005. The conservation easement and the associated recreation plan are managed by the Department of Environmental Conservation (DEC).

An interpretive program along the trail is nearly complete and will be ready to install later this summer. It is being designed by students and faculty at the ESF Ranger School in Wanakena. It will include an introductory sign and map at the trailhead kiosk, 11 thematic signs placed at points of interest along the trail, plus an informational/directional sign at the intersection of the CL50 and the LPNT. The FPP applied for and received a Damoth Fund grant to help pay for the benches and interpretive signs and sign posts.

The Lost Pond Nature trail was originally conceived of and built by Dr. Edwin H. Ketchledge. “Ketch”, as he was known to many, was a professor of forest botany from 1955 to 1985 at the SUNY College of Environmental Science and Forestry (ESF) in Syracuse, NY. He also served as Director of ESF’s Cranberry Lake Biological Station for 9 years, spending those summers on the lake with his family. In the late 1970s, he created the trail and an 11-page interpretive booklet that guided visitors along the ¾ mile path to the pond, but not around it. The booklet focused on the plants of the area, especially trees, and on the impacts of human settlement in the Cranberry Lake region. Following his retirement, the trail fell out of use, and eventually was overgrown to the point of disappearing.

In the meantime, and in the wake of the 1995 windstorm, the Five Ponds Partners (FPP) were born. The FPP is an all-volunteer sub-committee of the Clifton-Fine Economic Development Corporation. Many of the current members are founding members, and so have volunteered their knowledge, experience and labor for over 15 years! Their mission is to “Ensure that forest recreation resources existing now and in the future on State-owned lands and easements in the Clifton-Fine area are maintained and promoted.” By 2012, the group had accomplished many good things under the leadership of Sherman Craig, including the creation and promotion of the CL50. 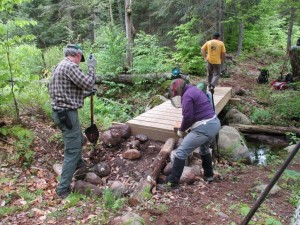 Encouraged by local interest and suggestions, we began to set our sights on re-establishing and improving the Lost Pond Nature Trail. The group reached out to the DEC and APA for guidance and suggestions. A few years went by, but by fall of 2015, the planets were aligning nicely. The APA and DEC had approved the trail layout and construction plan, and had authorized the FPP to lead the project. Molpus had also given their blessing and promised to safeguard the trail during harvesting operations. Thus trail construction began, and the vision started to become real. As Chair of the FPP and a Professor at the ESF Ranger School, I was able to entice community members, faculty and students to volunteer their time towards the project on several occasions. It has been especially exciting and important to me to involve ESF in this project, to maintain an ESF connection in honor of Dr. Ketchledge and ESF’s long-standing ties to the region.

But the FPP and ESF did not act alone. DEC forestry staff enthusiastically and generously joined in, even though many of the work parties were held on Saturdays during summer and fall. And the DEC Operations crew was instrumental. On several occasions, when our hand tools weren’t enough, they lugged chainsaws, brush saws, gas and oil down the trail in an effort to help clear the trail of brush, hazardous trees and fallen logs. The DEC also designed and provided the materials for the sturdy bridge that now crosses the outlet of Lost Pond. And significantly, last summer the DEC contracted the Adirondack Mountain Club (ADK) Pro Trail Crew to smooth out and harden certain sections of trail; work that required their expert skills and experience. This trail is the result of a successful partnership between the FPP, the APA, the DEC, Molpus Woodlands, ADK, and a generous group of hard-working volunteers from across the community and beyond.

On behalf of Molpus Woodlands, the NYSDEC, the Towns of Clifton and Fine, and the Five Ponds Partners, thank you for coming and supporting the Lost Pond Nature Trail! If you like, you may hike the trail now, or return to enjoy it another day.

Jamie Savage is Chair of the Five Ponds Partners and a Professor at The Ranger School in Wanakena.