This article originally appeared in the ADK Schenectady Chapter newsletter, “The Lookout”

Pesticide technicians and volunteers in the Capital Region finally got a weather break in early May. Taking advantage of a dry spring day—a requirement for pesticide treatments, and a rarity this time of year—they traveled into a 10-acre tract of the Plotterkill Preserve and sprayed about 250 trees in an attempt to slow down an infestation of hemlock woolly adelgid, an aphid-like insect that invades and kills hemlocks.

In April, a similar foray treated roughly 200 trees in Anchor Diamond Park in the Town of Ballston, Saratoga County. If funding can be found, the Lisha Kill Preserve in Niskayuna may be next and future rounds of treatment are planned for hemlock groves in these and other area preserves, including the Indian Kill Preserve in Glenville. 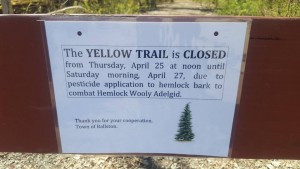 Mary Werner, co-chair of the Schenectady County Invasive Species Committee with Kathy Fisher, said of the pesticide use, “The overall idea is to preserve the hemlocks through chemical treatments until biological controls can be effective.” Such biological controls are currently being developed through the state Hemlock Initiative based out of Cornell University. Notable candidates include a species of predatory beetle—referred to as “Little Larry”—and a species of fly, both of which attack the adelgid. 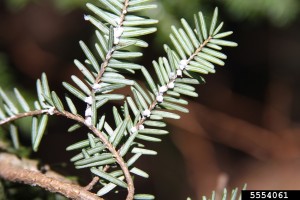 The adelgid has done serious damage in the Great Smokies and Appalachians and is rapidly migrating north, having already established itself in Long Island, the lower Hudson Valley and the Finger Lakes. Werner said the localized spraying is both to protect the groves themselves and to prevent the adelgid from spreading further into the Adirondack Park. The hemlock is a critical tree there, as it stabilizes steep slopes and protects stream environments. For such reasons its protection is of high priority for the Adirondack Mountain Club.

In the Plotterkill Preserve hemlocks play a similar role in protecting stream environments, noted Jessica Cancellieri of the Forest Health Unit of the Department of Environmental Conservation. Hemlocks help prevent slumping and slides, which are a characteristic problem there and keep the stream environment shaded and cool. Fortunately, she said, the adelgid infestation remains limited there and it is hoped that by treating about 25 percent of the hemlocks, the pest will remain contained.

Werner notes that the Invasive Species Committee is the only one at the county-level in the state, working as a volunteer corps under the Schenectady County Environmental Advisory Council (SCEAC). The committee includes Department of Environmental Conservation (DEC) personnel and members of the Capital-Mohawk Partnership for Regional Invasive Species Management. The DEC is funding the chemical application in the Plotterkill and Anchor Diamond. That work cost about $4,000 for the 2017 spraying in Plotterkill to treat about 250 of approximately 2,000 hemlocks there. Estimates are that the treatments will be effective for about five years.

Mal Provost is an ADK member and part of the ADK Schenectady Chapter. He serves as editor for their bimonthly newsletter, The Lookout, and on the chapter board as Conservation Chair.