Just weeks after the invasive Emerald Ash Borer was discovered for the first time in the Adirondack Park, another invasive species has been found within the boundaries of the Blue Line: Hemlock Woolly Adelgid (HWA). First recorded in the Adirondack Park in 2017 on Prospect Mountain in Lake George, HWA was recently found on Glen Island, about 12 miles north of Prospect Mountain. An insect native to East Asia, HWA infests Northeastern Hemlocks and can wipe out stands in a matter of years. Hemlocks are vital to protecting streams banks from erosion and create habitat preferred by many Northeastern amphibians. As such, HWA represents a critical threat to the health of the Adirondack Park’s ecosystem. 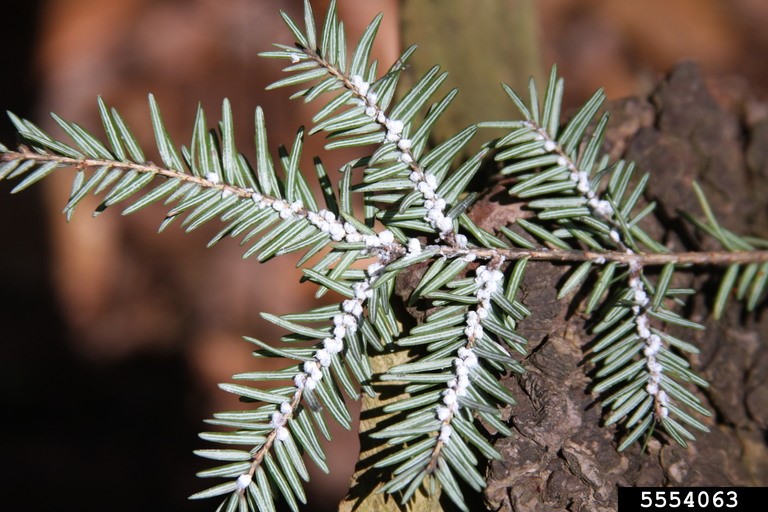 In this second occurrence of HWA, a camper at the Glen Island Campground used iMapinvasives to report the infestation and the Department of Environmental Conservation (DEC) was able to get to the site quickly. Finding and reporting invasive species early before they have had a chance to become established allows land mangers to quickly eliminate the infestation. This situation is a great example of how early detection works and represents the type of activity that needs to be happening everywhere across the Adirondacks in order to protect Hemlock stands.

With this in mind, we need your help to continue this fight against HWA and other invasive species. Please familiarize yourself with how to identify Hemlock trees and Hemlock Woolly Adelgid, and use iMapinvasives or its Mobile App to report any suspected findings of HWA. You can also report HWA using a form. Whether you are enjoying the Adirondack Park to hike, camp, paddle, ski, or just to relax, you can play an important role in protecting it and other wild places from the spread of invasive species.