Do You Hop, Bound, Step, or Amble?

A fresh layer of snow reveals what creatures are sneaking around when no one is looking. Excellent camouflage, nocturnal habits, and good hearing help many animals evade observation, but footprints in the snow can give us insights into who is around and what they may be doing. Anyone can start to recognize tracks with patience, observation, and a bit of training. ADK educators have honed the techniques of tracking with fourth graders over the past sixteen years during the Marie L. Haberl School Outreach Program: Three Seasons at Heart Lake. This year, we are sharing tracking tips digitally so everyone can discover their wild neighbors!

The key to animal tracking is recognizing patterns. One of the easiest ways to learn and identify tracks is to divide animals into Hoppers, Bounders, Perfect Steppers, and Amblers. These words describe different animal gaits, or the pattern animals follow as they walk. Once you can recognize the different track gaits, the size and shape of the footprints will help narrow down the culprit.

Perfect steppers get their name from their precise footwork. All of these animals stand on four legs. As they walk, their back foot lands right where their front foot was previously. This gait helps perfect steppers conserve energy when traveling through deep snow by saving them the effort of breaking through the snowpack with every step. Deer, moose, coyotes, and bobcats are all examples of perfect steppers.

Hoppers do exactly as their name suggests: they hop! The snowshoe hair is the largest hopper. Their powerful hind legs do most of the work to propel these animals forward. They land on their back feet with their two front paws resting behind their larger back feet for extra stability before again propelling themselves forward using their back legs. Other hoppers include small rodents like mice, squirrels, and voles. Mice tracks often have a long thin line running through the center where their tail drags.

Bounder is used to describe the gait of weasels and many other members of the Mustelid family. Bounder tracks are characterized by two prints placed next to each other, typically with one foot slightly farther forward. As they move, they stretch out forward to plant both of their front paws, then arch their back and bring their back paws forward. The resulting tracks are a long path of imprints spaced evenly apart. The size of bounder tracks vary greatly from the ten-inch long ermine to the fisher, which grows up to two and a half feet. One delightful variation within bounder tracks comes from the otter. Otters move in this same pattern, except when they’re sliding on their bellies. The resulting track is a series of bounder tracks followed by a slide similar to that left by a snowboard.

The last track gait group is not as uniform as the others: Amblers. This is used to describe the tracks of less organized animals. Often large and unafraid—bear, porcupine, skunk, and beaver are all considered amblers—these animals have natural defenses and lots of fat to keep them warm. As such, they are not as reliant on efficient movement for their survival. Ambler tracks often appear random; their feet typically alternate but don’t consistently point the same direction. Odds are, if a track doesn’t match one of the other gaits, the animal is an ambler. 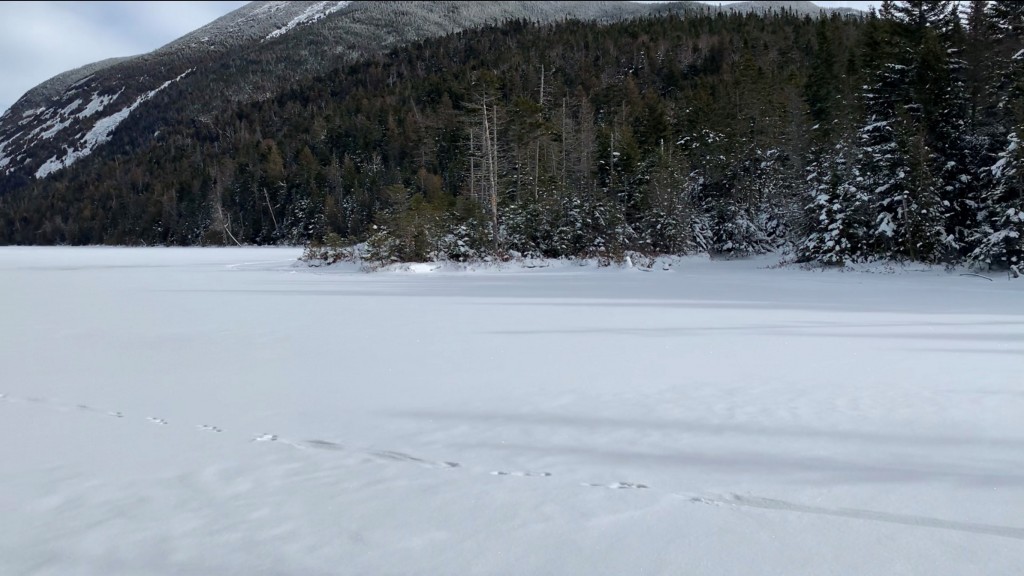 In addition to the tracks themselves, you will also want to consider them in the context of their environment. For example, look for obstacles that the tracks travel over or under—this is another hint of the size of the animal. Could they fit under that log? Do the tracks go up a tree? Does it look like the animal ran straight into the water? If you can’t figure it out in the field, a photo of a track can help with further identification once you’re back home. Be sure to include a pencil, glove, or boot in the photo for scale.

Animal tracks bring the stillness of winter to life and reveal the character of these wild animals. The marten track that crosses the trail fifteen times and bounds to and from trees shows a playful and high energy animal. The deliberate line of a coyote tracks shows a focused hunter. The intersection of a snowshoe hair track and a bobcat track could be a mere coincidence or an exhilarating chase. All this is preserved briefly in the snow so go experience it while it lasts!