Climate Change and the Future of Adirondack Alpine Zones

Spend any amount of time above treeline in the High Peaks and you’re sure to notice a few things: an abundance of exposed rock, the smell of soggy alpine soils, the rustling of dwarf shrubs, or the whistled song of a white-throated sparrow. But always forefront is the primary element in the alpine zone, the air.

Whether in the clammy cold of thick fog or (if you’re lucky) the warmth of the blazing sun, an alpine summit offers total immersion. Absorbing the dome of blue sky overhead, sweeping panoramic views, and ledges and deep ravines below, all while bracing against gale-force winds. The feeling of standing in the sky.

It is no surprise, then, that global changes to our atmosphere are likely to have ­consequences for alpine areas. Climate change is ­causing ­increased temperatures, shifting weather ­patterns, and many complex and unpredictable impacts on ecosystems everywhere. The High Peaks will not be spared. In fact, alpine areas worldwide are warming at a disproportionately high rate, and the Northeast is already the fastest-­warming region of the contiguous United States. Extreme weather is nothing new to New York’s alpine summits, but along with battering rain and ice, the wind now seems to bring with it a sense of looming change. Will we be ready?

My experience with alpine plants came first as a summit steward in the High Peaks, and later through studying the interaction of snowmelt and plant phenology (the timing of seasonal events such as leaf-out and flowering) on Mt. Washington, New Hampshire. Dubbed “arctic-alpine,” these sedge meadows, cushion plants, heath shrubs, krummholz, and a wide variety of mosses and lichens are holdovers from the end of the last ice age, when glacial retreat left behind tundra conditions across the Northeast. They now exist in New York State only atop the highest High Peaks, where they form a complex mosaic of habitats that provide crucial functions to the surrounding forest ecosystem. Covering some 150 acres in total, they are truly an ecological treasure. 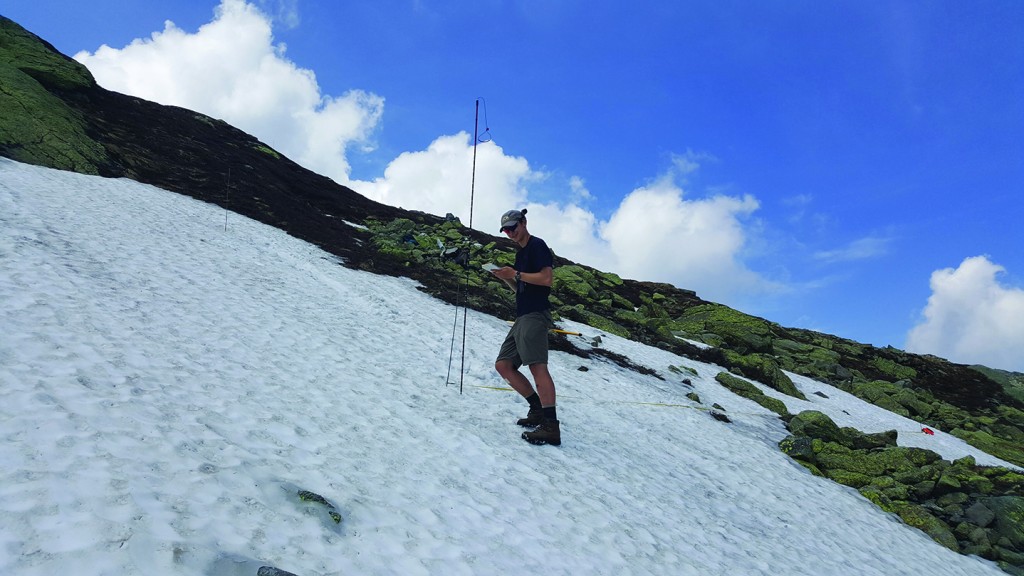 For plants adapted to tundra conditions, though, climate change portends a precarious future. Arctic-­alpine communities are particularly sensitive to changes in temperature and precipitation, and the rapid pace of change means that stress will continue to mount. While still relatively little is known about the specific ways in which climate change will affect arctic-alpine ecosystems in the Adirondacks, we do have an idea of what may be in store.

First, snowmelt and frost cycles are key to the health of arctic-alpine plant communities. An increase in average temperature, forecasted in climate models, may lead to a decrease in snowpack levels or advanced timing of snowmelt at high elevations, with potentially serious consequences for the growth, development, and reproductive success of arctic-alpine plants. Advanced snowmelt triggers plants to flower earlier, potentially before the emergence of insects adapted to pollinate them. Such an asynchrony could disrupt or impair plants’ seasonal cycles. Further effects could be seen in rare or specialized habitats such as alpine snowbeds, which form in sheltered sites where snow accumulates and lasts into the warmer months. Advanced snowmelt there could decrease available snowbed habitat, affecting species diversity and the functions those communities provide, including food and host plants for insects, shelter for birds and mammals, and (potentially) genetically unique populations of lowland plants.

Second, arctic-alpine communities persist in the High Peaks because they are adapted to the extreme conditions at high elevations that most other plants cannot survive. If increased temperatures bring ameliorated conditions, arctic-alpine species may no longer be able to compete with trees and shrubs at current treeline, and those species will creep upslope. Studies have shown that this process is already occurring, with trees and shrubs displacing forbs (non-woody plants that are not grass-like) and mosses at alpine sites from Vermont to Maine. Similar trends are expected in the High Peaks, where any upward migration of treeline will result in a loss of alpine habitat. 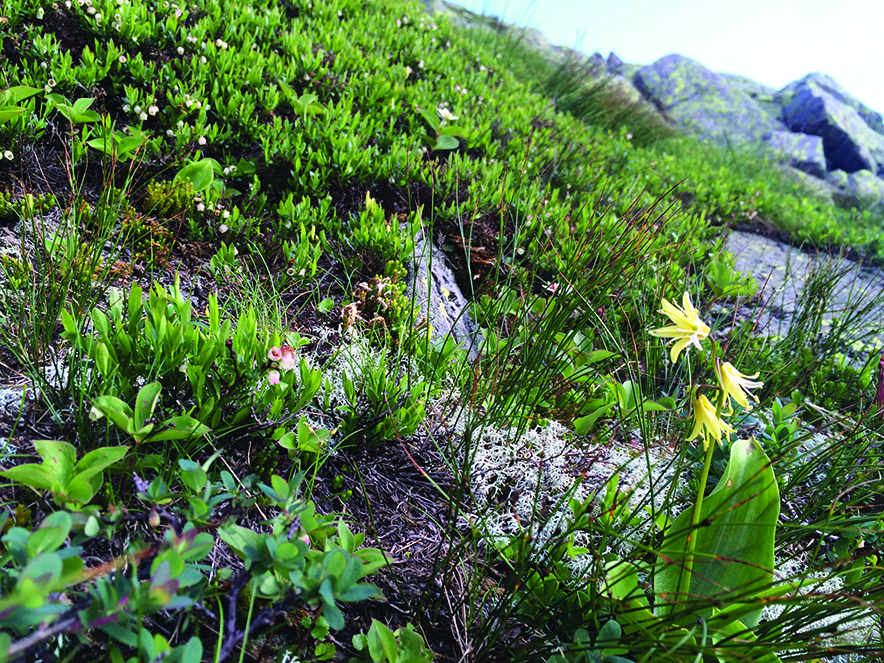 Third, exotic or invasive species thrive in disturbed environments, where they reproduce quickly and outcompete native species for water, nutrients, and space, sometimes radically transforming ecosystems. Increased disturbance due to climate change makes the establishment and proliferation of invasive species in arctic-alpine areas more likely, while ameliorated conditions (such as a longer growing season) make conditions more favorable once they take root. Greater foot traffic of hikers over recent years has also increased the chances that invasive species will be introduced to alpine areas and makes controlling their spread far more difficult. Invasives have already been documented in the High Peaks, most notably a patch of dandelions on the summit of Mt. Marcy (of all places!) and more than a dozen species along the Whiteface Mountain toll road. On Mt. Washington, dandelions have spread from the summit building and parking areas to nearby alpine habitats, requiring yearly eradication ­efforts by volunteers to keep them in check. While the Marcy population does not appear to be expanding, it is possible that other more virulent species, should they become established, could pose a significant threat to arctic-­alpine communities in the High Peaks.

Last, increased temperature will almost certainly have effects on other weather factors like evaporation rates, cloud cover, and precipitation. It remains unclear, though, whether such an increase will lead to an overall increase or decrease in precipitation, or whether the ratio of rain to snow will be altered. Weather models for the mountains of the Northeast are mixed on this point, with at least one suggesting that an increase in cloud cover or fog could insulate alpine areas from warming occurring at lower elevations. Given the extreme complexity of the climate system, however, precise predictions are hard to come by and such findings simply highlight how much remains to be known.

During my time in the mountains, I felt I was witnessing many of these effects firsthand. I rode out Hurricane Irene from the Lake Colden interior outpost and, days later, navigated through mud and debris left by a newly created slide. As a summit steward, unseasonably warm days weighed on my mind as I spoke with hikers, the heat seeming out of place for that cold-adapted environment. Plants at my earliest melting research sites flowered sometimes weeks earlier than others nearby, acting according to entirely different schedules. We know these events are becoming more frequent. But can we connect the dots? Of course, we can’t singlehandedly bring down carbon emissions or isolate the High Peaks from the global problem of climate change. It is the air itself that tethers their fate to that of the world at large, after all. Maybe it’s not possible to avoid some effects, and we’ll just have to get used to that.

But we can plan and be ready. A detailed, long-term monitoring program that collects data on temperature, precipitation, plant phenology, treeline, and invasive species must be a priority for the High Peaks. Without good data, we will lack the insight necessary to anticipate and address the challenges of climate change or to successfully manage alpine areas through this new era of uncertainty.

It has been inexplicably difficult, however, to obtain scientific research permits for the High Peaks in recent years. The New York State Department of Environmental Conservation (DEC), which oversees and approves such research, maintains that research must “have practical application to wilderness management problems” or “employ the

[High Peaks] where no viable alternatives exist.” In other words, because climate change is not a problem that DEC itself can fix, it is not within their purview to allow research on it. Proposals (including mine) have been denied on such grounds.

This policy seems to constitute an abdication of DEC’s responsibility to conserve, improve, and protect New York’s natural resources and environment, especially when it comes to some of our most vulnerable habitats—arctic-alpine communities. Given the magnitude of the crisis at hand, planning for and mitigating the effects of climate change are in fact directly relevant to wilderness management. In its Unit Management Plan for the High Peaks, DEC lists as an objective to “Encourage scientific research projects that will aid in preserving wilderness character, benefit the scientific and educational communities, and improve DEC’s stewardship of the area.” DEC should immediately begin to authorize climate-related studies and consider such monitoring programs necessary for the health and sustainability of the High Peaks.

The High Peaks Strategic Planning Advisory Group (HPAG), a collaboration of stakeholders in local government, recreation, natural resource protection, business, tourism, and non-profit organizations (including ADK), stressed in its June 2020 interim report the need for such a data-­driven approach to management. Partnerships with regional colleges or universities could be fruitful on that front, bringing in outside expertise, ­labor, and funding while allowing oversight and coordination among HPAG and DEC. The future of arctic-­alpine communities will depend partly on our ability to understand and anticipate changes occurring in those ecosystems, and a centralized research agenda would be helpful in setting priorities and ensuring close cooperation among participants.

But benefits for understanding and protecting arctic-alpine areas will not be limited to the plants. The economy of the Adirondack region is largely dependent on its ability to draw millions of visitors every year from around the world, many of whom venture out on a hike. The health and well-being of its people, businesses, and hamlets, therefore, are crucially linked to the health and well-being of its peaks and trails.

The governor has outlined his goal to make New York carbon-neutral by 2040, and the High Peaks region now has an opportunity to become a leader in that effort. Local governments should encourage and support the adoption of green technologies (such as electrically powered shuttles, already proposed by HPAG) and sustainability initiatives, bolstering the region’s authority on responsible outdoor recreation and laying the groundwork for a sustainable and prosperous future for its residents.

For plants that have been through so many ordeals over the eons, persistence represents success. The presence of arctic-alpine plants in the High Peaks is owed to both their remarkable evolutionary adaptations and the twists of fate that have carried them through many challenges and periods of transition. But the fate of arctic-­alpine communities may depend on our response to the entirely new and unprecedented challenge of climate change. Their survival will be a testament to the efforts we undertake today to recognize and combat those effects. Let us be an example for how to successfully manage that threatened and irreplaceable ecosystem in these trying times. With science and proactive leadership, the High Peaks can remain a vital source of income, insight, and inspiration for generations to come.