Home/Discover/News/Be Kind with Your Kindness Rocks

Be Kind with Your Kindness Rocks 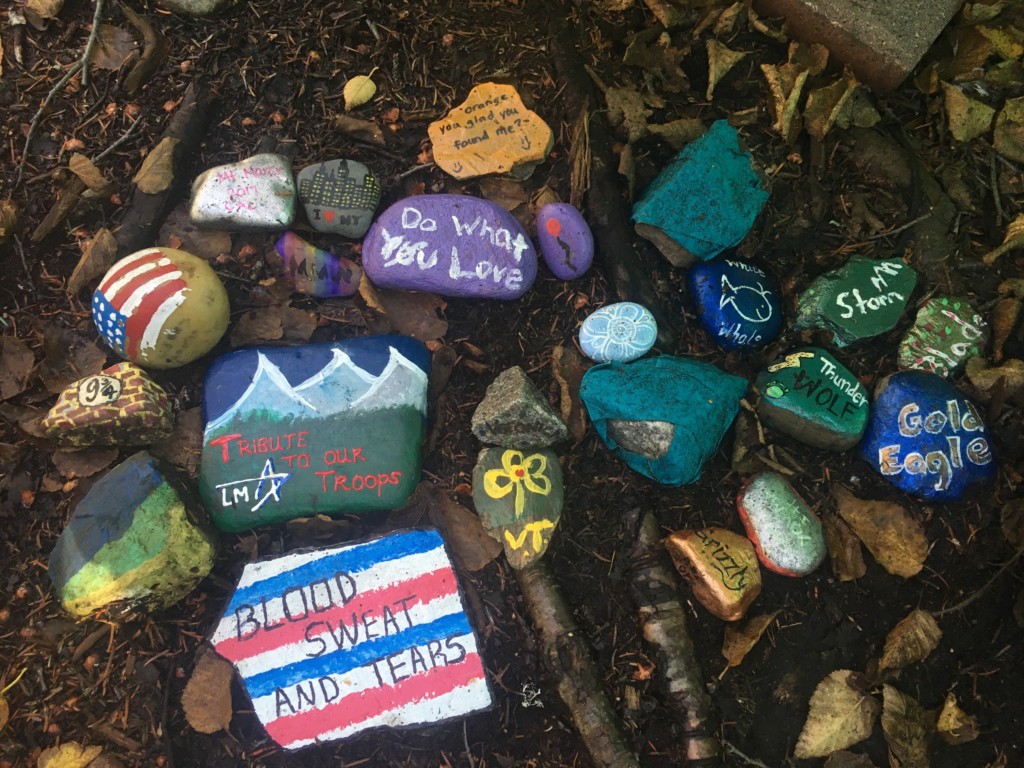 Kindness Rocks that were collected on Mt. Marcy this summer. Photo by Ryan Nerp.

This summer, the phenomenon of placing painted rocks throughout our public lands has been sweeping through places like Yellowstone, Zion, and a multitude of other national parks. Photos of people finding these rocks are shared to local Facebook groups with hundreds of members, where they talk about areas the rocks are being placed and found. The Adirondack Park has not been spared, and brightly painted rocks have been popping up on public lands throughout the Park. Over the 2017 summer season, dozens were found on mountain-tops and along trails by hikers and Summit Stewards alike. These rocks are a part of the Kindness Rocks Project, which encourages people to paint rocks, write a short message on them, and place them somewhere where someone might find them, putting a smile on someone’s face. Many of the painted rocks have writing that urges others to paint their own rocks and place them wherever they go.

Although the movement’s goal is to spread kindness and happiness through these brightly colored rocks, they do not have this desired effect on our public lands, where they disrupt the natural landscape and the ability of visitors to experience wild nature.  Most hikers in the Adirondacks use hiking as an escape into nature, and as an opportunity to immerse themselves into the outdoors to enjoy the beauty and solitude it offers. Finding a bright painted rock can interrupt someone from his or her reverie and alter that sense of wildness.

Originally these rocks were intended to go in gardens and around cities to be found, similar to a scavenger hunt, where the effect of a painted rock is less jarring and out 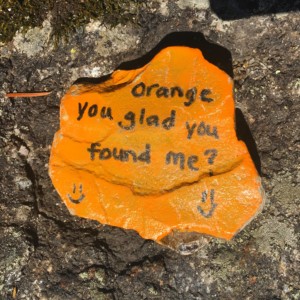 of sync with its surroundings. However, more and more have found their way into places like the Adirondack Forest Preserve, which does not align with an outdoor ethic encouraging Leave No Trace.  The Leave No Trace Principle of “Leave What You Find” not only means that you shouldn’t take something from our public lands, but that you shouldn’t leave anything that doesn’t belong there as well. In our wild areas, somebody walking through shouldn’t be able to easily tell that someone has been there before them, but a painted rock with writing on it is an obvious sign of previous human presence. Julia Goren, Adirondack Mountain Club’s Education Director, says, “When we enter wilderness areas we do so because we want to have a wild experience where we can feel like we are the only one who has been there. Painted rocks take away that experience. If you’re trying to spread kindness, leaving a painted rock, which is viewed as trash, does not spread the joy that the movement is aiming for; instead, it does the opposite.”

Someone might argue, “What about the trail signs, trail markers, cairns and trail bridges?  Don’t those objects represent humans being in this place before us and degrade a sense of wildness also?” They very well could for some folks, but those features are approved by the land manager and are meant to protect the resource and keep visitors safe.  Painted rocks don’t help with either of these objectives.  The impact that they cause is completely avoidable.

The Kindness Rocks Project discourages participants from leaving rocks on public lands: “It is frowned upon to drop anything in our National Forests and National Parks, where they have a LNT (Leave No Trace) policy for visitors. Please visit our blog for further information on respecting our environment.”

There are other ways to participate in fun community-building activities. Instead of leaving painted rocks on mountains and in forests, where they are considered and treated as trash, choose instead to place them in developed areas where it is legal to do so. Downtown areas, neighborhoods, your own yard—these are great places to decorate. Focus exploration on our Forest Preserve on natural objects. Keeping our wild places wild is kinder for everyone.

Written by Nick Pace. Nick is from Dallas, TX and is in his junior year at Hamilton College, where he is majoring in environmental studies. When he graduates from college he wants work to formulate conservation policy for state governments. He enjoys birdwatching, playing rugby, and playing fetch with his dog, Gracy