Backwoods Ethics: Technology in the Wild

There is probably not much argument about what the biggest change in the backcountry is since the millennium. 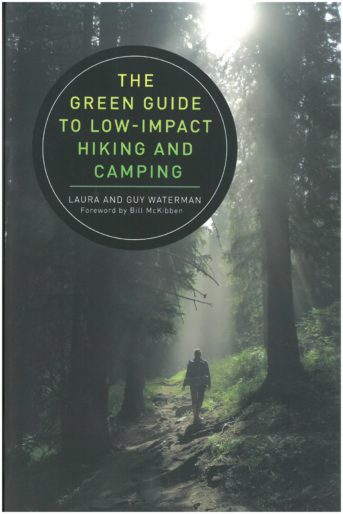 That’s right! All those handy, hand-held digital devices that can keep us spot-on, up-to-date, and instantaneously in touch.

As a way of clocking their impact on the backcountry scene, let’s look at where we were with communication devices when a book called Backwoods Ethics my husband Guy Waterman and I wrote came out in 1979, thirty-seven years ago. There were phone booths back then, the word “landline” wasn’t a word, and no one walked the supermarket aisles making a phone call.

By the time Backwoods Ethics emerged in a second edition in 1993, an American team attempting Everest had dialed directly home from the mountain. This pace-setting event happened in 1988.

Add another decade and the world was turning digital at what felt, to the generation who made calls from phone booths, at warp speed. Now we could carry our everyday lives with us when we went into the wild. We could keep in touch with the office, friends, and family as if we’d never left. But did we really intend to take quite so much of our daily lives with us on this mountain vacation?

Let’s look at the GPS. It’s a wonderful tool for trail workers. They can log in the data that would have taken hours to process back at the office. But the GPS is not infallible. We all know about dead spots. We understand, for safety reasons, why we should be familiar with map and compass. We know that in letting the GPS do all the work two things happen: Our skill level with map and compass drops, and we change the relationship we have to the land itself. We’ve interposed this digital device between ourselves and the wild.

Here’s a story a friend of mine told me about a trip he took with three other teenagers and their teacher in 1960. They were on a trek along the then un-mapped Inca Trail in the Andes. On their last day they found themselves stopped by the edge of a cliff—no way down. No way home! My friend’s feeling, as he contemplated the enormous drop, was that they’d reached the edge of the earth. With no map or written directions, and only their eyes and brains to figure out how to reach the valley below, they realized they’d followed the wrong ridge. After a frosty night on the ledge, the next morning they gained the correct ridge that took them out. My friend enjoyed telling this story, partly because it is unduplicatable today.

All those on trips in the not-very-distant past of the late 20th century were best off to consider themselves on their own. These words have a meaning now lost, a meaning hard to imagine with the digital technology at our fingertips. It’s impossible to reenact that “on your own” experience with a smart phone in your pocket.

Backwoods Ethics has just been published in a third edition with the title changed to The Green Guide to Low Impact Hiking and Camping that reflects our thinking about the environmental issues we are confronting today.

But what about the accompanying leap we’ve made into the digital age? The clock only runs forward. I’d like to think that because these digital devices can insert themselves between us and the wild, we are given the opportunity to be more mindful of where we are when we’re out there. We go into the woods and up on the heights for our souls. Who is thinking about what our souls need? We must work harder to find that wildness now, and so it becomes more precious. And that which is precious, we safeguard. If our hand-held devices have given us the opportunity to experience a more profound understanding of the fragility of wildness, that seems to me a good thing.

Laura Waterman is an author, hiker, climber, Vermont homesteader and is the co-author of several defining books on backcountry and wilderness ethics. She is also a founder and board member of the Waterman Fund.

About the Author: Laura Waterman