Mal Provost of the Schenectady Chapter shared his experience below. 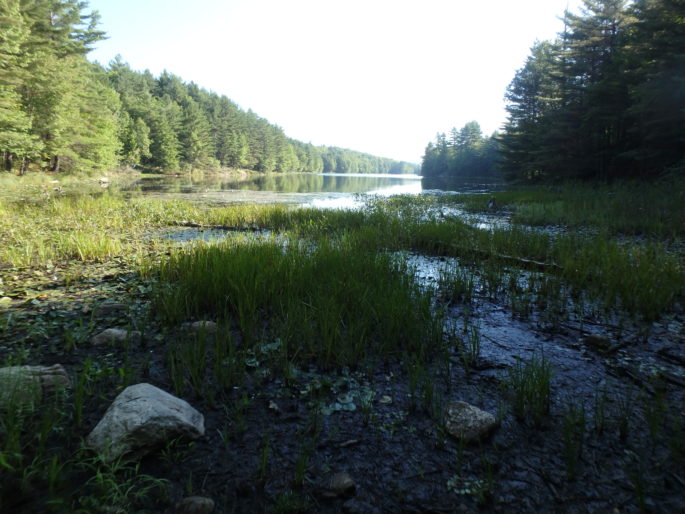 Our Backcountry Water Monitors trip into Long Pond and Island Pond on August 4, 2016 offered a “two-fer” as part of the survey effort for aquatic invasive species plants.

Right off the top let me note the walk in (1.1 from trailhead to Long Pond and about 0.4 to Island Pond from the trail split) was easy due to the experience and GPS skills of Norm Kuchar of the Schenectady Chapter of the ADK.

The route is a state snowmobile trail and is clearly marked as such, beginning at a parking pullout off a dirt section of Padanarum Road Spur (National Geographic Map 743). The complicating factor are the numerous flooded areas from beaver dams and areas that have become bogs from vehicle traffic. Also, there are trail markers that end at water’s edge, as these would be passable over ice. Navigating around these obstacles involved some minor bushwhacks and traversing beaver dams, which Norm with his extensive hiking experience did with ease, plus periodic checks of his GPS in sometimes dense undergrowth. I struggled along behind with the inflatable packraft.Backcountry Water Monitors: Long Pond and Island Pond

Both ponds have limited useful shore access, guarded by extensive marshes or fir undergrowth, so finding a launch spot for the packraft took some scouting. We had 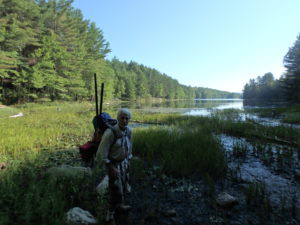 planned for Norm to do a bit of shore survey – at least along Long Pond which appeared better on our maps – but found this would have been inefficient at best. The packraft was the only reasonable way to do the survey.

The survey happily showed no invasives. We saw extensive areas of water lillies and pickerel weed along the shores, but no loose strife was visible nor were samples of milfoil, water chestnut or other priority invasives found. I used visual observation and photos, plus rake drags on the pond bottoms and came up with nothing suspicious.

About the Author: Mal Provost