Earlier this month, ADK’s (Adirondack Mountain Club’s) professional trail crew returned to the Heart Lake Program Center to start training for the summer season. Once in question due to the coronavirus pandemic, the development of a stringent health and safety plan, which was approved by the state in May, and strong support from members and donors has allowed the program to start its 41st consecutive season.

However, like many things in 2020, this summer will not be a typical one for ADK’s professional trail crew. Protocols, such as mask wearing, consistent sanitation, and regular temperature checks are all new tasks that they will have to add to their daily routine of flipping boulders, chopping blowdown, and building turnpikes. Additionally, they are operating on an abbreviated project schedule with fewer crew members than usual. This summer, they will be working in four locations—Jones Hill, Avalanche Pass, Salmon River, and Haystack—compared to the seven project locations they worked on in summer 2019. 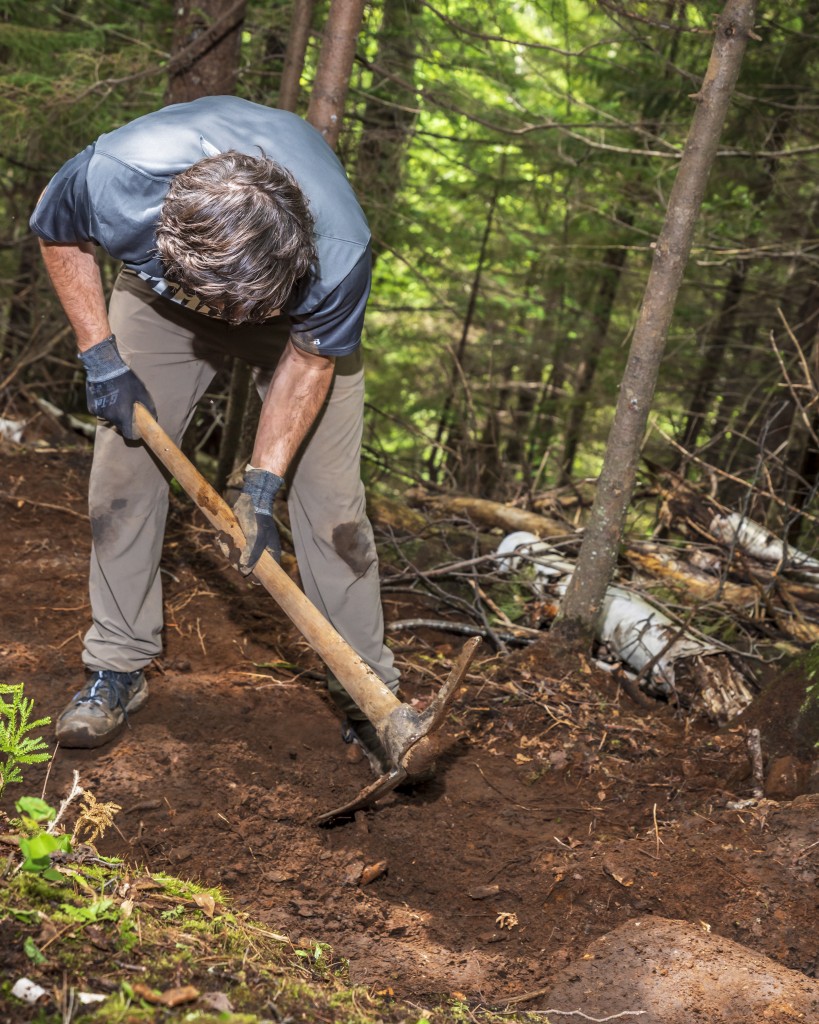 Even more impacted than the professional trail crew are ADK’s volunteer programs. With 11 out of 14 volunteer projects cancelled for the year due to coronavirus concerns, ADK’s Trails Coordinator, Andrew Hamlin, estimates that nearly 5,000 hours of volunteer work were lost. “Our volunteer programs were scheduled to install two span bridges, build 1,500 feet of rock turnpiking, and to clear drainages and blowdown on 50 miles of trail this year,” he said. “The detriment to the Forest Preserve is incalculable; it will take several years to regain these lost stewardship efforts.”

Additionally, when the pandemic broke out, the NYS Department of Environmental Conservation was forced to shift priorities, resulting in a five-month delay in volunteer stewardship agreements for ADK’s Trail Steward and Adopt-A-Lean-to programs. This has resulted in an estimated loss of an additional 3,000 volunteer hours and hundreds of trails and lean-tos left without a stewardship presence during a critical time of year.

Despite these challenges, ADK will be able to field a trail crew this year, which is a success given the circumstances. Generous support from the Adirondack 46ers, who pledged a $41,000 contribution to the program last December, helped ensure that ADK’s professional trail crew had the funding to start the year. “The 46er’s contributions makes up over half of all funding for our trail construction efforts this year. Our season would not be possible without their generosity and their dedication to preserving the High Peaks Wilderness,” said Andrew. Through their support and the consistent backing of our members and donors, ADK’s professional trail crew will be able to complete its listed projects and continue to improve trail networks in the Adirondack Park.

If you would like to support trail work in the New York State, you can do so with a donation to ADK.