Location
Chapter is based in Plattsburgh, NY — 60 minutes from Montreal or a 30-minute ferry trip from Burlington, VT. Plattsburgh is on Lake Champlain, the border between New York and Vermont. Lake Placid, the site of 1932 and 1980 Winter Olympic Games, as well as Adirondack High Peaks and lakes and hills of Whitney Park, are 60 to 90 minutes away. Outings and events organized by the Algonquin Chapter take place mainly in the Adirondack Park or adjacent areas of northeastern New York, with occasional trips to Montreal or Vermont and other places in New England. 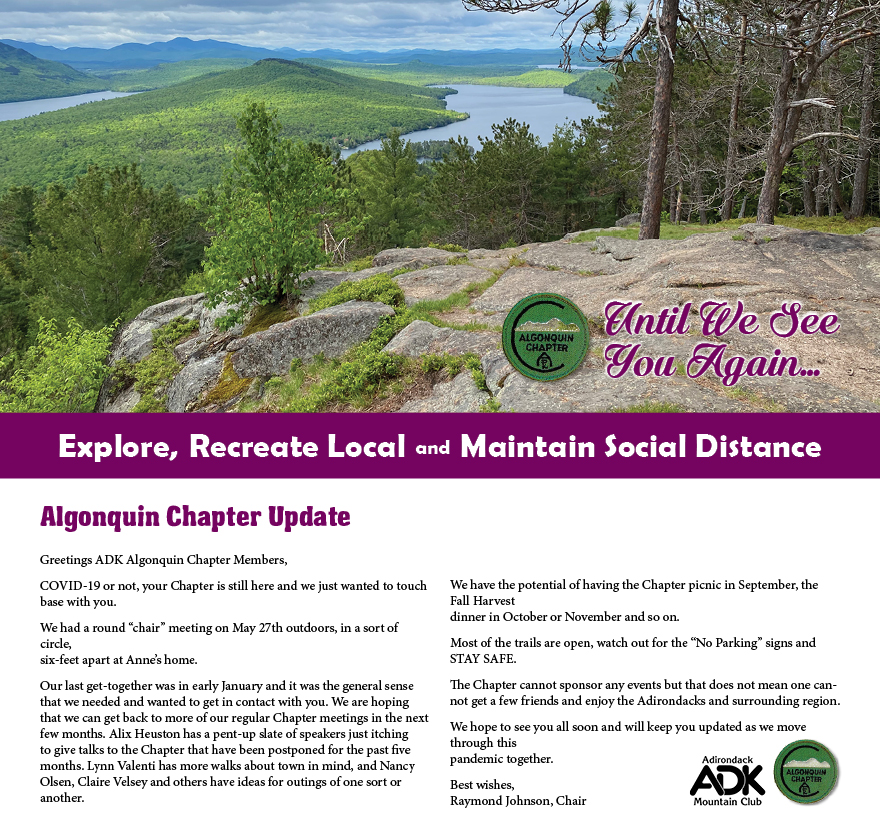 History
The Algonquin Chapter’s first meetings were described in the May-June 1948 issue of Adirondac:

“This winter we’ve been happy to get together at last and organize a group of out-of-door lovers who not only will get each other out into the mountains, but who will also have an active part in the maintenance and promotion of the Adirondacks…
With our charter approved at the March 6, 1948 meeting in Poughkeepsie, we feel we are at last a part of the outfit that makes the maps and helps maintain the trails…
The name Algonquin was chosen for several reasons… the Indian tribe who inhabited this territory three hundred years ago… the favorite mountain… It typifies our interests rather than localizes our homes.” In 1998, we celebrated our 50th anniversary with a special chapter anniversary outing each and a new Algonquin patch.

Present day
Chapter members continue the tradition of promoting the wise use of all of New York’s resources. Through educational presentations to the chapter (always open to the public), work on adopted trails and lean-tos, sponsorship of local youth programs, and participation in local and club-wide projects and events. The Algonquin Chapter demonstrates, for their larger community, ADK’s dedication to recreation, conservation, education, and advocacy.

Meetings
November through May:
On the second Friday of the month, unless there is a holiday conflict, in which case the meeting takes place the following Friday. General Meetings are held in the second floor auditorium at the Old Clinton County Court House in Plattsburgh on the corner of Margaret Street and Court Street (use ramp entrance from Court Street). Our monthly educational program begins at 7 p.m. with the business meeting to follow.

June, September:
On a Friday in the first half of the month. Chapter Picnics offer a more leisurely social gathering.

Note: Chapter meetings and outings are announced in the Plattsburgh Press-Republican.

How to join
Members of the Algonquin Chapter live in the counties of northeastern New York, i.e. Clinton, Essex and Franklin counties, and the metropolitan areas of Burlington, VT and Montreal. Affiliate members come from throughout northern New York.

To join ADK visit adk.org or call 1-800-395-8080. Please designate Algonquin Chapter as your home chapter at no additional cost. You’ll receive Mountain Topics, the Chapter’s newsletter, and have a vote in chapter business.

Members of other ADK chapters often “affiliate” with Algonquin Chapter — which places them on the Mountain Topics mailing list and provides an up-to-date schedule of chapter outings — for an additional $7, sent to ADK headquarters along with their membership dues.
Josef Nagele 2020-12-30T15:54:47-05:00