A Major Peak Gets a New Name

By Grace L. Hudowalski, Published in 1942

The high, slender pinnacle to the south of Dix Mountain has a new name—Hough Peak!

To most of us this comes as a surprise for we have been calling this mountain “Marshall”—after Bob and George who climbed it—for years. The name “Middle Dix” was also applied to the peak.

Culminating the 50 years of conservation celebration in New York State in 1935, the Conservation Department petitioned the State Board of Geographic Names that this mountain be named “Hough” to honor Dr. Franklin B. Hough (pronounced “Huff”), rightly called “the Father of American Forestry”.

While it is unfortunate that this particular mountain was chosen to bear Dr. Hough’s name, there is no doubt nut that he was a great man in many fields of endeavor, and especially he was outstanding in forest preservation. Surely his tireless efforts and notable results entitle him to a forest monument!

Franklin Hough’s full attention was drawn to the idea of forest preservation in 1872 when, as a memorial of the citizens of New York State, Thomas G. Alvord introduced an act in the Assembly which resulted in the formation of a State Park Commission. Russel M. L. Carson in his second installment on “The Adirondack Forest Preserve” printed in High Spots, January 1935, gives a very comprehensive picture of conditions and explains the content of the act. 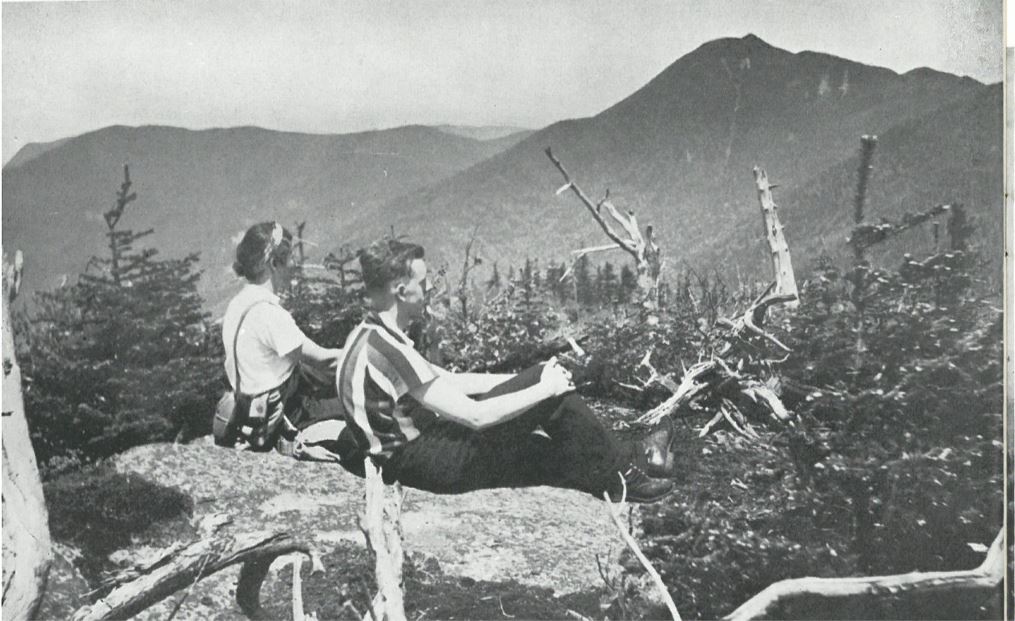 Together with Verplank Colvin who was shortly to be appointed superintendent of the new Topographical Survey of the Adirondack Wilderness of New York, and five other men, Franklin B. Hough was put on this Commission. The report which these men made suggested that the Adirondacks be preserved and gave us their reasons: 1) it was a measure of political economy since the forests are a source of wealth to the State, and 2) for social and more reasons; the State should retain title of these lands because of danger of fire (barkless timber left to rot having served the tanner’s purpose); conservation of water supply for Erie Canal and various manufactories; danger of floods; health—moderating temperature and preventing choleric conditions; and recreational purposes.

Previously, Colvin had introduced the word “Park” as the name for this work. With the statement that our forests were being denuded and flood conditions might result, the idea of a park created a false impression, and people felt that the creation of this “Adirondack Park” meant a playground for the rich or people of leisure. Unfortunately the matter was defeated, but the seed had been sown, and Colvin went about his survey, and Hough went off to Washington to accept the post of Forest Agent in the Department of Agriculture.

Hough made exhaustive surveys of forest conditions in the States and on the continent. He was a prolific writer of some 78 publications including government reports and bulletins of history, meteorology, climatology, education, law, and civil records, as well as editing colonial documents and a magazine. While his reports were full of every detail, only sections of them were ever printed due to lack of appropriation from the government. Through his work in forest preservation he was considered a “denudatic” and his efforts were more appreciated by foreign countries who were far ahead of America in ideals and methods on forest preservation, than by most persons in the States.

Nevertheless Hough’s last service was to his native New York State. In the winter of 1884-85 he was called from Washington to frame a bill for the preservation of the Adirondacks. On May 15, 1885, the Forest Commission Act, creating Adirondack and Catskill preserves, came into being. However, while working on this bill, Dr. Hough contracted pneumonia, the first serious illness of his life, and less than a month after bull had passed, he died.

Franklin Hough had done his work well. His keen statistical mind, his interest in botany and minerals, his medical profession, had worked together with his love for the out-of-doors toward making him the “Father of American Forestry”. Likewise his indefatigable efforts made him a pioneer for public consciousness for the perpetuation of our forest lands. While his work was for the most part educational, it was well founded and carefully executed.

When next you stand on Giant-of-the-Valley, look to the south of high Dix and notice the sharp-pointed cone to the left. Or, when you have pushed your way to the top of trailless McComb, just to the north, so close that you can almost touch it, drink in the symmetrical beauty if the mountain that comes to the shoulder of high Dix; or, from Tahawus’s lofty summit—if you are fortunate enough to be out of the clouds—look past the horn on Dix and view to summit to the southeast.

To the west its scooped-out rocks form a basin that acts as a shield from storms and winds. To north and south a series of ledges—steep, rocky, and covered with “cripplebrush” and loose stones for circular sides to the basin. To the east a luxuriant forest marches triumphant from base to crest. This mountain, that stands untrailed, four thousand four hundred and four feet above sea level, is “Hough Peak”.